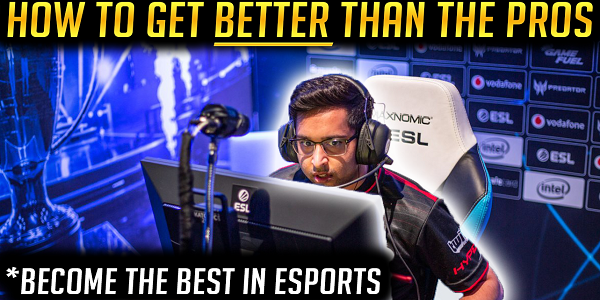 Is it possible to become a pro gamer?

Is it a waste of time to try and become a pro player? Many players dream of making it to the pro scene, but how realistic is this goal?

Think about it. Pro players have been playing for years, investing far more time than you. And if they have trained for say 5000 hours, and you’ve only trained for just 1000 hours, then how could you ever catch up?

If you think of it like a long race up a mountain, these players got to begin the race long before you did. But as it turns out, they wasted a lot of their time taking the wrong paths or embarking on much longer routes. But now, you can learn from their mistakes and take the shortcuts. So, as a result, that seemingly massive head start they have on you might not be so big after all.

For example, A scientist may spend a lifetime trying to make a particular discovery. But a college student can then learn their entire theory and application of it in a single semester. Similarly, a lot of the time pro players have spent in the game was used to develop strategies, theories and playstyles that you can now quickly copy. So a pro team may have spent 1000 hours focused purely on developing a particular set of strategies that then takes you and your team a few weekends to copy.

And in games with constant updates and meta changes, a player may spend hundreds of hours mastering a particular character or playstyle only for it to become completely obsolete in a new meta.

Then even consider the S-curve of learning. In short, the s-curve of learning demonstrates how once we achieve a high level of skill, our rate of skill development slows down rapidly. So these days, the pro players may not be improving much at all, especially if their motivation has decreased with time or if they’re no longer pushing themselves towards new playstyles.

In short, that head start that the pros have on you isn’t as large as you’d think. And catching up is much more realistic than you’d imagine.

But there’s still a problem here. Most players model their training tactics and performance around the pros; they end up using the exact same methods to get better. As a result, they improve at the exact same rate.

And so, even after you take a few shortcuts on your journey, if you ultimately end up on the same path, moving forward at the exact same pace as the pros, then you’ll forever remain behind them. So, if you want to make it to the pro scene, you need to; you need to think differently, train differently and embark on your own path that will allow you to climb faster and farther than the pros.

So how can you do this?…

In sports, as much as esports, we admire the players who can use their intuition and feel for the game to make crazy decisions and then execute them flawlessly.

And then, in our own performance, we feel the same. It’s those moments where we enter a state of flow, lose track of our own mind and just feel our way through highlight-worthy plays that ultimately get us hooked.

But what if I told you that everything you love about the game is wrong, that the intuitive flow-state feeling that gets you hooked is actually holding you back.

What if I then also criticized everything from the methods you use to train to the way you hold the mouse and keyboard.

Well, when someone tries to tell us that our approach to the game is wrong, that the feeling we love most while playing is holding us back, then we might get a little angry.

And that’s why many golfers dislike the player Bryson Dechambeau. But despite him playing a wildly different game, we can still learn a lot from his genius approach to golf. And by taking a similar approach to esports, you might just learn how to improve faster and farther than the pros.

Known as “The Mad Scientist of Golf,” Bryson spent the last ten years questioning conventional assumptions about how to play Golf.

Everything he does is strange, from the equipment he uses to his swing style and his training methods. Instead of trusting his feeling and intuition, he pulls from physics and geometry. As a result, he’s been criticized for turning Golf into a science.

But, despite going against decades of conventional wisdom from all the pro players before him, Bryson pushed through the back-lash and continued to train like a scientist.

And then, in September 2020, it all paid off as he captured his first major championship, the US Open, winning by six strokes.

With his win came even more controversy, with a fellow player Rory Mcilroy even saying: “that’s just the complete opposite of what you think a US open champion does.” But obviously, he’s wrong. As it turns out, this scientific thinking and going against the standard approach to the game is exactly what it takes to become a champion.

So what does it take for you to become a “Mad Scientist of Esports”? And what precisely can you learn from Bryson DeChameau that will set you apart from everyone else and help you climb even higher than the pros?

Step One: Question Everything

In the eyes of his detractors, conventional wisdom adds to the beauty of the game, and every step Bryson takes away from it shatters that beauty. Similarly, his out-of-the-box thinking goes against decades of knowledge around how to perform the best. So how could all those great players who came before him be wrong?

Well, for all of the 20th century, there was virtually no data on the factors that led to golfing success. People had opinions, but nobody did data-driven analysis. That changed in 2004 when the PGA Tour started tracking every shot, over a million of them every season. Today, that system stores more than 174 attributes from over 20 million shots.

Armed with the data, statisticians, including Columbia professor Mark Broadie dispelled myths about good golf. For example, Broadie discovered that players focused too much on shots from under 100 yards. Instead, ball-striking, especially off the tee and on shots from 150-225 yards, are the most critical factors in the quest to shoot low scores. This shows how conventional wisdom, even of the top players in the world, can often be wrong.

After Bryson discovered this he developed a new approach to the game, leading to his victory in the US Open.

Trying to think outside the box may seem obvious on the surface, but rarely does anyone actually question the norm and try to develop new theories or record and analyze new information.

Questioning the god-like players seems blasphemous. If they’re so good, how could they be wrong? But in reality, much of what it takes to improve faster and perform better has yet to be discovered, especially in esports.

And think about it, most gamers watch the same guides that parrot the same information about how pro players before us got good. But if you want to become better than them, you need to think outside the box.

So consider diving deeper into the science of how to learn faster, develop your motor skills quicker and use that theory to develop a new training system.

In recent years, many tools have been developed to help Golf players understand each swing’s precision, power, and consistency.

Yet many players and coaches refuse to use the new tools or adopt a scientific approach. They assume that over-analyzing things will lead to overthinking, wasting effort and taking the natural joy out of the game.

As a man of science, Bryson insists on collecting data and getting immediate feedback after each shot. He’s likely one of the only pro golfers that brings his launch monitor onto the course so he can mimic tournament conditions. Then, with all that data, he can study trends and identify how he can improve.

In esports we can use analytics tools as well. For example, mobalytics, leetify and similar tools give advanced measurements and insights into where things are going wrong.

Without such tools, its easy to make incorrect assumptions about our weaknesses and waste hundreds of hours training the wrong things. But with them, we can start to train like a scientist.

DeChambeau and his team at Neuropeak Pro have taken things to the next level by using brain training, otherwise known as neurofeedback. If you aren’t familiar with it, I highly recommend you check out our video on the topic.

But in short, it trains his brain to enter an optimal state of focus on-demand. And in my opinion, it is one of the most critical factors that allows him to switch from an analytical mindset to a state of focus and flow.

For example, when it comes to putting, most players will change their putting style and approach to the way they feel. This reliance on intuition can work out quite well for many players. And by focusing on feeling alone, they can avoid letting their mind get overwhelmed with too many variables.

But Bryson reads putts geometrically with a technique called vector putting that takes into effect the grade of the slope and the distance to determine where to hit the putt. This means that he has to logically analyze many different variables to plan his shot, completely overloading the mind and taking out the intuitive aspect that others rely on. But somehow, he can then switch from analysis mode to performance mode in an instance.

Being able to do this is much harder than you’d imagine. Research shows that only seasoned meditators that have practiced meditation for thousands of hours can calm their mind in an instant. But Bryson’s brain training is likely a massive tool that allows him to do it.

So how do you put this into action?

To my knowledge, the Esports Elite course is the only one that teaches you how to develop the most effective training routine using scientific research. It also has analytics tools for games like CSGO and League of Legends. If you want to check it out we will leave a link for that in the description below.

Of course, it’s a paid course, designed only for those who are deeply serious about getting good at the game. But if you’re just getting started then I’d focus on trying to do some of your own research around meta-learning and how to develop motor skills faster, then try to create your own training methods based on what you learn. You can dive into some of our free content on the matter with the playlists that I’ll link below, and be sure to subscribe to this channel for more research-based content.

As for the brain training, I’ll leave some resources below as well, including a video that we made on what it is and how it works.

So is it a waste of time to try and become a pro player? For many players, it can feel that way. They start at a disadvantage against the other players that have invested thousands of hours more than them. On the surface, it seems like it’s impossible to catch up. But by utilizing the knowledge of those who came before you, and then taking it a step further by adding a scientific approach to the game, you can gain a massive advantage.

So start digging into the theories and strategies that others aren’t even considering. While many around you will criticize the unconventional approach and tell you it’s holding you back, you’ll be able to prove them wrong, showing them that your crazy thinking and unique approach to the game is actually the secret pathway to the top of the pro scene.