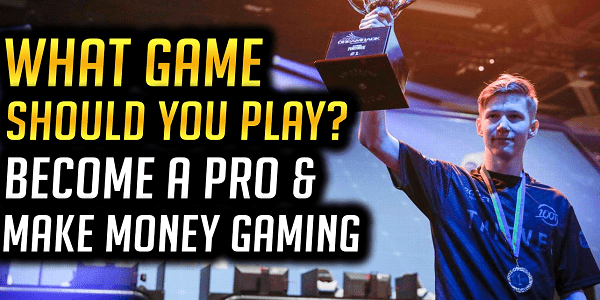 LOOKING FOR OPPORTUNITIES IN ESPORTS

Let’s take a look at this objectively. If you look at all the major esports games you can start to evaluate them based on certain metrics like their popularity and general viewership, the size of the developers and how good they are at creating an esports environment, and which games have the clearest pathways to the pro scene.

Games like Overwatch and League of Legends have a relatively good structure for a semi-pro scene and are each backed by very companies that seem to understand how to create an esports league.

But this isn’t the only thing that matters. We really need to look at the available opportunity that games like these and other games offer. You see, if a game is an ideal esport, but presents next to no opportunity for rising players to actually make money while playing, then it isn’t really worth pursuing.

And one important metric for understanding the available opportunity within an esport is by following the money. When you do this you will start to factor in aspects like online tournaments that bring opportunity for making money to nonpro players. For example, in Fortnite, it’s easy to transition skill into tournament winnings without having to build a team or joining an org. This means that for even amateur players there is a vast amount of opportunity.

And of course, the other key considerations are the up and coming games or games that are coming out within the upcoming years. This year Valorant is the hot game of conversation, and with a developer like Riot games, and early popularity during its beta, I would have relatively high hopes for its success as an esport. And since everyone is just getting into it now, it’s going to be a lot easier to become a pro in it vs a game like CSGO where veteran players have years of experience on you.

THE MOST IMPORTANT FACTOR FOR PICKING YOUR MAIN GAME

Now all of this is important to consider if you’re at a crossroads between a few games, and these are likely things you’ve thought about when picking your esport of choice. But it’s important for us to switch gears into what matters even more than any of these factors, and identify where most players really go wrong when choosing a game.

Most players try to build a monumental amount of skill, on top of a foundation of sand. And when this happens, no matter how much time and energy they commit, it will inevitably crumble as they lose their motivation and stop playing altogether.

This is one of the greatest weaknesses of amateur players and one of the greatest assets pro players have – a foundation of passion, on which they build their skills. So beyond the logistics of what game is most trendy or has the most popularity, the best way to decide which game to pursue is by finding your passion.

HOW TO FIND YOUR PASSION

Finding your passion is about experimenting to see what ignites your inner joy. It’s like finding love, in that you have to go on a lot of dates to not only find a good match but to understand what exactly makes it a good match. What are the qualities and variables that you connect with, what is it that sparks your deepest feelings of passion and desire?

But to take this metaphor a step further. Once you find love, you need to put in the effort to turn it into a sustainable relationship. It takes effort and commitment to building something that lasts through the hardest of times.

To bring this back to esports, it seems like many amateur players are trying to build relationships without giving themselves time to fall in love. They’re looking at how to become a pro in games that are still in the beta, games that they’ve barely played let alone mastered.

On the flip side, many professional esports players have invested thousands of hours into the game with a pure focus on having fun and enjoying the process of self-improvement. Only once they’ve reached the top ranks did they start to consider the prospect of turning it into a career.

Now playing multiple games at once doesn’t necessarily mean that you’re wasting your time. Different passions CAN be cultivated at once. You don’t need to choose one over the other when you’re still in the exploring phase.

As an example if you’re torn between committing to CS:GO vs Valorant, I’d say play them both and play them both with the purpose of actively improving. Not only does this encourage you to explore the options, but it helps you to develop general skills that transfer between games, such as general positioning, dodging, and aiming mechanics.

Ultimately you might not commit to either game, but instead a new FPS game that comes out in a few years from now. With the skill of learning games quickly, and the muscle memory built up from your past experience, you might just find this new game a perfect match for you, one that you can fall in love with and rapidly improve at.

So if you’re torn between what games you should play, I’d recommend that you don’t overthink it too soon. Trying to force love doesn’t work. So instead, focus on having fun and exploring the options until you feel like you’ve discovered something worth fighting for. After that, you can start putting in the effort to make it work. Actively improving your skills and setting yourself up for success. Then only at the pinnacle of your skill, when you’ve reached a high enough rank should the worry about professional prospects enter your mind. At this level, it will be the natural next step, and one that is clear and easy to make.

So go out there and simply enjoy the process of experimentation and improvement. With these as your main focus, you will be able to build a sturdy foundation of passion on which you can build a professional esports career.