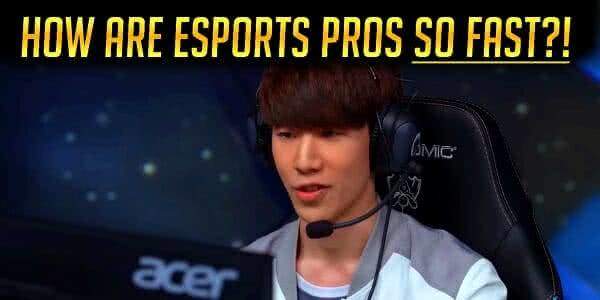 The reason we label great players as “godlike” is usually due to some insane level of speed in their skill execution.

And of course, when we stumble upon godlike highlights of pro players pulling off insane moves, it creates a surge of inspiration, to develop our own skills and become just like them.

And if you’re not sure what I’m talking about, think back to how you felt the first time you saw a clip of Myth or Ninja building these elaborate structures in a matter of seconds and completely dominating a 1v1.

Or consider the lightning fast flick shots from CSGO pros like Coldzera.

Or ridiculous League of Legends plays like the infamous Faker vs. Ryu Zed play.

And despite your game of choice, you’ve likely wondered how your favorite players can pull off such amazing plays like these, with such insane speed.

Well, the true mechanism behind their speed isn’t some elusive talent that only these players are born with. And it’s not some god given reflexes. It’s a mechanism that exists in all of our brains and is something that even you are capable of developing.

And consider that for a moment. Consider what it would be like if you could play at faster speeds. If you could execute ridiculous skill combos in a matter of milliseconds, and constantly be one step ahead of your enemy in every 1v1.

Well, to uncover the true mechanism behind this, let’s dive into the mind of an esports legend to identify the mechanism that they use, to get to such insane speeds! And more importantly, let’s see if you are capable of achieving the same level of speed that turns average players into pros…

What does skill execution look like on a neurological level?

Every human action is the result of electrical impulses traveling along chains of nerve fibers. So when you hit a headshot or dodge an enemy gank, an impulse travels down those nerve fibers, like voltage through a chord, triggering the other fibers.

And these circuits of fibers are what dictate the precise strength and timing of every muscle contraction, as well as the shape and content of every one of our decisions.

And of course, if we have a sluggish and unreliable circuit, it means that we will have sluggish and unreliable movement, causing us to fall victim to our enemies; but with a fast and synchronous circuit, it means that we will be fast and synchronous in our movements, and we’ll constantly outplay the opponent.

But when I say fast, exactly how fast are we talking?

Well, when you react to something like an enemy coming into view, your brain has to receive a visual signal from your eyes, process what that signal means, make a decision to react, then send a new signal down to your muscles where your muscles contract.

Now the speed at which your brain receives the original signal, and sends a new signal to your muscles, is actually very fast, it’s about 110ms. But the middle part, where your brain needs to process the incoming information and make the decision of how to react is where this process starts to slow down.

In our very simple scenario where you are waiting for an enemy, you see them come into view then execute the action of shooting them, its likely that this takes about 250ms for you to fully react. And over half of this process, about 140ms is the time in which your brain has to actually process the information.

But in more complex scenarios where your brain has to process various unknown information or an array of different variables, your reaction time will increase much, much higher.

The reason for this is because when you first pick up a new game, you have to process tons of unknown information and look at every variable for the first time.

Now consider your skill execution today! After 10s, or 100s of hours invested in the game, chances are you are way faster then you were the first time you started playing.

But why does this happen? What is going on when you are developing your speed, and becoming faster?

Well every time you play in a match or practicing the game, or even just reviewing footage, you’re building up experience in your unconscious brain, you’re essentially accumulating tons of micro information; ranging from muscle memory to decision making, and then processing it whenever you encounter similar scenarios. And on a neurological level, this mental storage of game knowledge and skill execution is essentially a network of neural pathways, and everytime we fire one of these neural pathways, our nervous system makes an effort to make that circuit faster and better.

But how exactly does it do that? Well when that circuit is fired, our nervous system starts wrapping that circuit in a new sheath of insulation called Myelin. And myelin allows the electrical signal to travel down that circuit at faster and more efficient speeds.

And so, the more we fire a particular circuit, the more myelin optimizes that circuit, and the faster the signals travel. In fact, a fully myelinated circuit can increase signal velocity up to one hundred times faster than uninsulated fibers.

And beyond that, the Refractory time, which is the wait between one signal to the next decreases by a factor of 30.

And so the increased speed and decreased refractory time combine to boost overall information-processing by 3,000 times!

If you’ve ever had that feeling that something just isn’t coming to you, or you’re not nearly as fast as the pros, just remember that your brain is capable of learning that thing, and processing that information up to 3,000 times faster, given the right amount of practice. In other words, if you’re dedicated to becoming great at something, your brain is capable of adapting and making that happen.

HOW TO PRACTICE FOR MYELIN?

So when a good esports player is practicing, they are sending precise impulses along chains of wires in their brain, which then gives signals to myelinate that circuit. After an immense amount of training, those wires become more and more myelinated, increasing the bandwidth and speed.

And this is what allows players like Faker to execute amazing 1v1s, because chances are he’s executed very similar 1v1s hundreds and hundreds of times.

And this is what allows CSGO pros like Colzera to have insane flick shots because chances are they’ve practiced these exact movements hundreds, if not thousands of times in the workshop.

And so from this, one takeaway might be that repetition is key to speed, right?

When it comes to practicing a skill, the brain learns much faster when certain variables are present, and we can essentially hack our learning ability by adding in the necessary factors. But out of these factors, perhaps the most important one is struggle.

And the reason for this is because your brain has to reach to figure out what that word might actually be, and in this process, it might make mistakes; guessing an incorrect possibility, before settling on a completed answer. And when we have those elements of reaching, making a mistake and then reaching again, our learning velocity goes way up!

In other words, the key to developing the skill and mental circuits of a pro player is to constantly practice outside your comfort zone in a way where you are making mistakes, sensing those mistakes and then fixing them.

And this means two things, one is that when we are practicing in just the normal way where we are executing skills that are easy for us, and there is no sense of challenge, our brain really isn’t learning anything. So if you have a fantastic game where you win, you get tons of kills, or you reach a new personal record – perhaps there wasn’t enough challenge for your brain to actually learn or develop at all.

And the second big take away here is that by playing games as normal, we usually aren’t focused on the subtle details of our skill, and we are not aware of the small mistakes that we are actually making, because we are paying attention to all the changing variables around us. And of course, we can’t consciously correct a mistake if we’re not aware that we’re making it.

So we need focused practice. We must focus our efforts on a specific skill at a time, in a way where we can clearly sensing and making mistakes, and then making immediate efforts to fix them.

The most effective ways to do this is to utilize things like bot matches, workshops or other game features outside of the actual main game. Or at the very least hopping into each main game with a specific skill to focus.

So in short, developing myelin is not just about repeated action, but a purposeful challenge.

That being said, practicing deeply so that you produce more myelin is a very complex topic, and it’s worth exploring in much more detail, and so I will definitely be making a video on that in the near future. So if you aren’t subscribed yet, make sure make sure you subscribe and turn on notifications or else you might miss that.

And of course, if you’re already familiar with our videos then you know that the notion of “practicing” definitely comes up a lot, but don’t discount the nuance to this lesson. By having a deep understanding of how your brain works, you’ll be able to notice when you’re actually practicing in an effective way, and you’ll be able to notice what practice methods are truly working for you. So be mindful of the lessons in this video, and notice how it feels to challenge yourself, to grow new myelin, and to become a faster player.

It’s common for us to look to other players and see amazing plays where they execute their skills with crazy speed and say “wow they have great reflexes” or “they’re so fast and so talented”.

But pro players don’t have better reflexes or more talent than other people. The truth is that they just practiced their muscle memory, or more accurately, their myelin!

And it’s easy to mistake their decision making for crazy natural ability to process more information than the average person or some unique genetic mutation that gives them better reaction time. But in reality, they don’t.

They are simply just well prepared because they’ve been in the same scenario before, and they no longer have to think about it, they just do it.

And what’s crazy is that anyone can learn this, it just takes a ton of hard work and a ton of focused practice. And to be honest, that is a hell lot more impressive than natural reflexes!