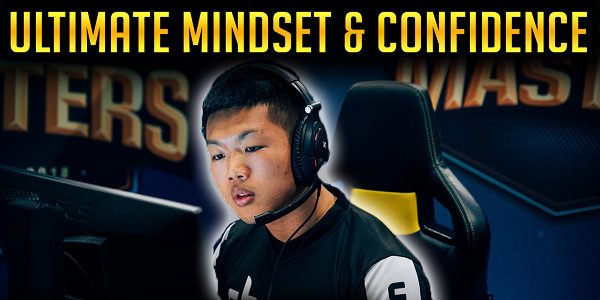 Chances are, your mindset is what’s holding you back from becoming a great player. Let me explain.

For example, imagine you’re last alive on your team and trying to pull off a clutch to save the game; your teammates go silent, watching and hoping that you can pull through while the enemy slowly closes in on you…

Or imagine that you’re one ranked game away from getting demoted and desperately trying to pull yourself together to break the losing streak.

In both of these situations, your mindset makes all the difference between playing to your full potential and completely choking under pressure.

And even as you rack up more experience, achieve higher performance, and get closer to that pro scene, your battle with stress and anxiety won’t fully go away.

Imagine going from playing online at home to suddenly playing Infront of thousands of spectators.

Or imagine going from being at the top of the leaderboard in your ranked games to joining a semi-pro team where you’re suddenly bottom fragging and struggling to prove yourself.

According to Dr. K from HealthyGamer, many gamers are unprepared for this kind of stressful transition of being elite among their local gaming communities to being average or below average among their peers once they turn pro (1) (1:29-1:54). Without the right mindset, this stress can cause you to crack under the pressure once you finally make it to the top, causing you to mess up your only shot in the pro scene.

So whether you’re battling to maintain your spot on a semi-pro team, trying to hold yourself together during an online tournament or just fighting to get that clutch victory in a ranked game, the pressure will be highly distracting.

And the harsh reality is that if you don’t learn how to handle this kind of pressure, you’ll lose far more ranked games, struggle in tournaments and fail under the weight of your team as you try to climb to the pro scene.

So how do you manage your stress & mindset and keep your focus despite your nerves?

Well, imagine you’re underperforming in a stressful game. If a teammate starts flaming you, saying, “What are you doing? Why aren’t you playing better?”. Chances are it’s going to affect your mindset and stress. But what if they instead say: “No worries, man, just focus on the next round, you go this.” The effect on your psyche is going to be vastly different.

But of course, it’s hard to control how others speak to you. What’s easier to control is how you speak to yourself. And so, Sport Psychology says that one of the best ways to encourage ourselves and boost our mindset is by developing a Self-Talk strategy.

Now the idea of talking to yourself seems a little weird. But in reality, you already have a voice in your head that expresses thoughts and opinions; you already have internal conversations, whether you are aware of most of them or not. In fact, estimates suggest we talk to ourselves at a rate of 400 words per minute. Yet most of us don’t really think about HOW we talk to ourselves.

To highlight this lets look to some fascinating findings from outside of esports.

In 2012, a group of researchers administered a Self-talk plan to a group of swimmers and measured their performance results over ten weeks. They then compared those results with swimmers of a similar age and skill level who did not use a Self-Talk plan.

Both groups of swimmers showed performance improvements. The swimmers who didn’t work on their Self-talk improved their results by 0.05% over 10 weeks, but the group who used their Self-talk plan improved by 1.43%. That may not seem like much of a difference on the surface, but a 1.43% increase is almost 30 times higher than 0.05% (2) .

Swimming isn’t the only sport where you see these improvements, though. A similar study had already been conducted at the University of Thessaly four years earlier with a group of tennis players. The group of players who used a Self-talk plan performed 13 times better than the other group after just one week. They also reported having self-confidence scores three times higher than the other groups. (6)

It’s crazy to me, given all of this scientific evidence, that so little is taught to aspiring gamers when it comes to this crucial skill. Given the huge boosts in performance that a good self-talk plan offers, it’s a no-brainer for you to start developing one for yourself today.

The first step to put this into action for yourself is to overcome the barrier that prevent most from improving their self talk. The issue is that your self-talk is so automatic that you probably don’t even recognize what is being said in your own mind. So how can you know whether the conversations you have with yourself are helpful or not?

TO overcome this, you need to begin by building that awareness. Next time you play an intense match or practice round, pay close attention to the voice in your head. Then write down notes of some of the things you say to yourself, particularly in situations when you lost, got killed, or made costly mistakes.

Now, ask yourself whether most of those statements were helpful, harmful, rational, realistic, or true?

As you work on your awareness, you’ll begin to notice patterns of negative self-talk. Amid high-pressure games, we naturally become emotionally invested in the experience. But highly emotional states can cause us to think irrationally, which is why it’s easy to say something like “I’m useless” or “Why do I bother playing if I’m so bad?”.

And these negative statements are harmful to your performance! But, the problem is that it’s hard to stop the emotion once it’s already flowing. Instead, you need to prepare your mind so that those emotions don’t trigger negative self-talk but rather more productive self-talk. Here’s an example of some affirmations you can use the next time your confidence dips and you need a self-talk boost:

These statements work because they follow the criteria of being helpful, rational, realistic, and true (4).

A Simple yet Effective Self-Talk Strategy

But, while this is a good start, just saying positive things to yourself isn’t enough. When you’re ready to take it to the next level, you’ll need to start using a more advanced tactic to reprogram you mindset.

Begin by dividing a sheet of paper into three columns and labelling the first column, “Unhelpful Thoughts.” In this column, you’ll list all of the unhealthy things you say to yourself while in the heat of battle.  The three unhelpful thoughts I’ll use as an example are “There’s no way I’ll win another round today.”, “All I do is let my team down.” and “I’m so bad today.”

We’ll skip the middle column for now. For the next step, in the third column, write down the healthy thought or truth that you want to use to keep yourself positive and confident. For example, I counteracted my first unhealthy thought with, “I can win today if I keep my focus and trust myself.”. My second with “I’m an important and valued member of the team.”. And my third with “I’m a great teammate and a dangerous enemy to play against.”

The 3rd step is crucial. That’s when you visit the middle column and list all the evidence against the unhelpful thought.

Most players who try better self-talk will make the mistake of trying to jump to the positive thought while still feeling the emotions from their negative self-talk. I’m sure you know what it’s like to feel deeply discouraged by a bad performance, only for a friend or coach to say something like, “Cmon, man, you’ve just gotta stay positive!”, “You’re an amazing player don’t worry about it”.

Sadly, without the evidence for these affirmations fresh in your mind, it’s going to be difficult for you to change your emotional state and raise your confidence. Repeating positive statements to yourself repeatedly while feeling low is like saying, “I’m warm, I’m warm, I’m warm!” while in shorts and a t-shirt in the middle of the Antarctic. It just won’t work.

But then finally, once you’ve listed all of the evidence against each unhelpful thought, make sure you take the time to sit for a few minutes per day to memorize your three columns.

Committing to this process of moving from an unhelpful thought to a healthy thought while using evidence reinforces our neural pathways to ensure that it’s easy to apply when the pressure is on (5).

So self-talk might be one of the important skills for you to master if you want to master your mindset, and even improve your performance.

Now, perhaps you’ve needed to master your thoughts for years but never knew how to start. Or maybe you never even recognized how much it influenced your mindset and performance.

But this exercise is an essential first step in growing and maintaining unshakable confidence and a burning motivation to dominate opponents game after game.

And if the idea of being a tier 1 player and fulfilling your lifelong dream of being a champion excites you, then you owe it to yourself to find a pen and paper as soon as this video ends and create your Self-talk strategy right away. Writing down and organizing your thoughts into three columns could make all the difference between you becoming a champion or choking when it matters most.