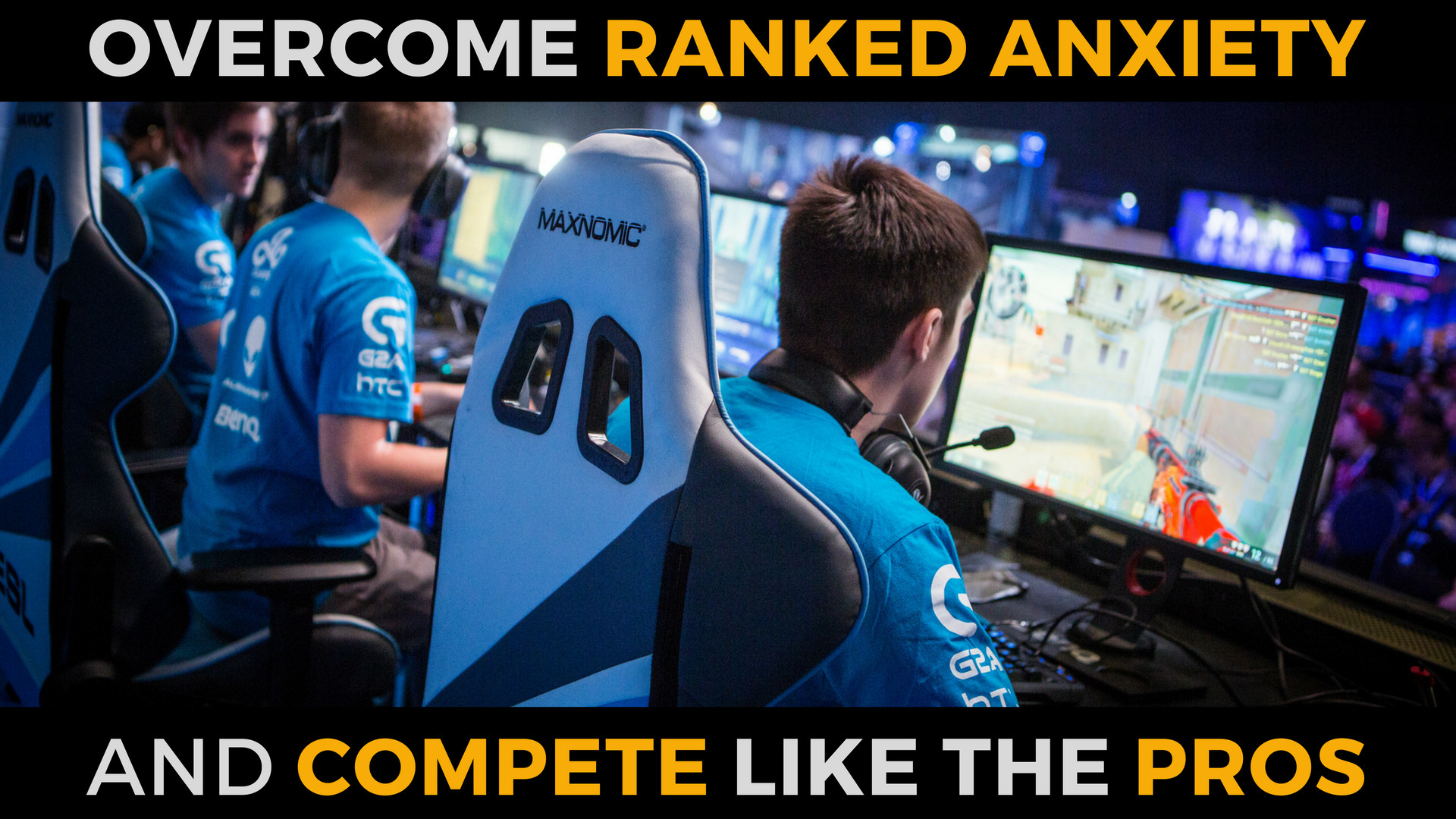 Regardless of the game you play or the level of skill that you play at, chances are you’re missing massive opportunities to improve – and to be honest almost everyone is! These opportunities are ones you’re biologically influenced to skip over, causing you and most other players to improve much slower than you’re capable of.

And the thing that’s holding you back from identifying and using these opportunities is your perspective, specifically your perspective on failure. While 99% of players respond to small failures in a very negative way, top level professional gamers often do the opposite. When top-level players make a mistake or lose a match, rather than reacting out of frustration, they often become emotionally reserved, and seem to get lost in their own heads. It is as though after losing, they take the time to soak in the experience and methodically think about it, rather than impulsively reacting to it in an impulsive way.

During a typical match there are 2 very important factors that motivate us to play well – these factors are Fear and frustration. Because we fear to lose and we fear to ruin our stats and drop in the ranks – we are motivated to win. And because every death and every loss brings us frustration, we put more pressure on ourselves to play better and avoid that frustration. So fear and frustration are beneficial in our motivation to win… But, paradoxically, fear and frustration directed towards the wrong things, and at the wrong magnitude can destroy your performance and destroy skill development…

It’s no secret that challenging yourself is best way to improve. And you will often hear the advice to get out of your comfort zone and take some risks in order to expand your skill set.

And this is exactly why North American eSports players go to korean bootcamps, and play on korean servers in order to train improve…

Unfortunately fear can convince us to avoid the levels of challenge that we need to improve – this may manifest in you not feeling confident enough to play an important game – For example, “ranked anxiety” is a commonly used term for those who find themself procrastinating from playing ranked games. They tend to avoid playing ranked matches until the perfect moment. Unfortunately the “perfect moment” often comes 3 hours after warming up. And the result of procrastinating from challenge means you’re constantly avoiding vital opportunities to improve.

Fear & New Skills:
Another key to improving as a competitive gamer is trying new skills and new strategies that force you out of your comfort zone…

But of course, fear prevents us from trying new things – whether that be a new characters or new strategy. The reason for this is because when we try something new we’re taking a big risk. Trying something new and often means constantly losing and constantly making a lot of mistakes until you get the hang of it.

So fear convinces us to “stick with what we know” and just avoid the the short-term loss. Unfortunately the result of constantly playing with the same strategies and the same characters over and over, is that we never develop the game knowledge or flexibility necessary to become a high-level player.

Once you’ve entered a match, or committed to training a skill you will quickly interact with frustration. Frustration creeps up when we make a mistake for example when we die at a pivotal moment (Team fight fail), miss an amazing opportunity (CoD bad aim, easy kill), or just lose an important match (CS:GO last alive dying). While frustration naturally teaches us what not to do, and thus helps us to improve as players – it is often directed in the wrong direction and with the wrong magnitude causing it destroy our skill development.

For example, when you die during an important match it’s easy to let frustration consume you. Next thing you know you’re in a state of blind with rage, screaming at you computer about how OP the enemy is, or how your teammate should have been there.

The first issue with this, is in directing frustration outwards. When you place the blame on someone else or a mechanic within the game, you are telling your brain that you did everything just fine and had no control over the outcome. In response your brain switches from trying to learn from the experience and improve as a player, to how best to flame your team or communicate your frustration to your monitor. And since every mistake, and every minor failure is “not your fault” and “not worth learning from”, you are constantly missing perhaps the greatest opportunity to improve.

The second issue here issue is how much you get frustrated. When we become extremely frustrated, it triggers our brain into what’s called fight-or-flight mode. Fight or flight mode is an evolutionary mechanism, built into the human brain to help our ancestors came across immediate danger – it would help them to run away or defend themselves from dangerous animals. It works redirecting energy from your brain into your body, so you can physically fight of flee from the danger. While this evolutionary mechanism might help us to run away from a tiger, it doesn’t do us much good when we are sitting stationary, trying to focus on the game. And since the fight or flight response causes energy to be direct away from the brain it leaves us in a state of decreased cognitive function, which destroys your immediate performance, and more importantly destroys your ability to learn from our mistakes.

Without Fear:
But let’s imagine for a moment that you took a magical pill, and this magical pill makes you a fearless player with full control over your frustration.

Being a player without fear you’ll enter more ranked games, take more challenges and develop a wider range of strategies and skills. And because of this new-found risk taking and desire to try new things, you will lose a bit more in the short-term but improve much faster and much farther than all the players who are stuck in their comfort zone.

And as a player without frustration, you are no longer held back by impulsive emotions. You can now actively take ownership of every failure and extract from them opportunities to improve. So for every small mistake you now take the time to watch the killcam, review the death recap, or play the back the scenario in your mind’s eye – as a result you begin to see more and more opportunities to improve.

And with the effects of this magical pill, you’ll now advance more and more, while everyone else is held back, by fear and frustration.

Fear and Frustration are Hardwired:
But here’s the problem. Fear of losing, and frustration with your mistakes, are 100% natural. And because you have constantly experienced fear and frustration over and over again while playing, your brain has wired itself to automatically feel these emotions without your conscious consent.

So how exactly do you eliminate fear and frustration if they’re wired into your brain? The key to this, like I mentioned at the beginning, is changing your perspective… The brain feels fear and frustration when you perceive that you are losing progress in any meaningful way – for example when you lose your spot in the ranks or lose at a tournament.

Changing Perspective:
So the issue here is not your emotions, it’s what you perceive as losing. And if you key focus is on individual wins, or improving your rank – then any hint of losing a match or losing your current rank will scare the hell out of you and cause you to feel frustrated. And of course the only way to avoid this is to change your perspective and change your goals.

The top esports masters don’t perceive short-term victory or small bumps in the ranks as the ultimate end-goal achievement. Instead they perceive these as small bonuses towards their long-term goal… and that long-term goal being their skill development. Thus short-term losses and constant mistakes don’t even phase them, in fact I assume small mistakes have the potential to excite them, because instead of perceiving them as a loss, they perceive them as a victory towards greater skills.

Even the Most Successful Street Fighter Player In the World, Daigo Umehara talks about how “Tournaments are a playgrounds for people who practice for growth…” And once he made that realization, he finally started making continued growth his goal, rather than winning.” And throughout the book he urges players to change their perspective from playing for the sake of winning to playing for the sake of improving.

Final Practical Advice:
Now of course improving your skills is already something you want, but it can’t just be a want, it needs to become your main goal. You need to begin looking at every win and every loss as an equal success, if it helps you improve as a player. And every minor mistake or major failure must be perceived as an exciting opportunity to learn.

Of Course I’m not saying that you shouldn’t try to win, of course winning is nice, but rather than it being the main objective winning should be the fruits of your labor.

So the next time when you hop into a game, start making this new perspective a habit. You will begin to notice when frustration bubbles up or when fear tries to persuade you away from challenge. At this point, remind yourself that it’s okay to lose and it’s okay to make mistakes, because these failures bring massive opportunity for you to improve – and improving is what it’s all about.