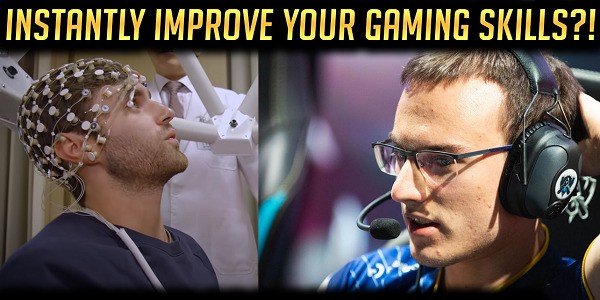 BOOSTING YOUR BRAIN FOR BETTER TRAINING

Being able to stay focused for long hours is one of the most incredible skills any competitive gamer can acquire.

When we are focused, we can think clearly, absorb more knowledge, and perform at the peak of our skills.

But when fatigue kicks in, our performance declines, our ability to learn dissipates, and our mind becomes foggy.

Now consider what it takes to become a pro esports player. At its core, it requires thousands of hours of effective practice. And racking up these hours of quality practice means long gaming sessions with constant focus while learning and performing.

So, those who can focus for longer than others will gain those thousands of hours of effective practice far easier, and inevitably will reach the top ranks far quicker.

So how can we enhance our energy and focus so that we can train longer and train better?

Well, one method is through substances like caffeine and nootropics; these have a lot of fascinating biological interactions that can give esports players a significant focus boost.

But in recent years, as our understanding of the human brain and our technology have each improved, we’ve accessed a brand new avenue for altering our minds. And in this video, I want to open up this avenue to you and show you one of many new technologies that hold the potential for altering the human brain in ways that may enhance your practice, performance, and esports career.

Playing at our best, maintaining that performance, and enhancing our training quality all require a perfect balance of energy & focus. And to influence this energy and focus, we must alter our brain’s activity.

Now, there is a constant electrical activity that underlies every mental state and cognitive process – we usually refer to this as brain oscillations or brain waves.

In the last video, I discussed what these brain waves are and how certain music can enhance them, leading to improved reaction time, focus, and even learning ability.

But while music can influence our brain’s electrical rhythm, it is limited in its effect. And there are likely far more powerful methods that we can use to get greater results.

In fact, I recently got the opportunity to chat with a Slovenian professor and researcher named Igor Jerman, who shed some light on how we might be able to use magnets to do precisely this. Igor studies bioelectromagnetic fields and works with a company called Omnipemf to create technology that can directly influence our brain waves via magnetic fields…

Igor: These magnetic fields can enhance, if they are repetitive, they can work in a resonance manner, and they can put certain processes in our head or in our organism in resonance with them. And they can then very slowly, and gently induce certain vibrations in our bodies.

Now before my conversation with Igor, I heard about similar technology used in clinical settings. Transcranial magnetic stimulation, referred to as TMS, uses large, powerful coils to stimulate specific brain areas and forces it to adopt a new way of functioning. TMS can have some profound benefits on cognitive functioning and enhancing mood. But the problem with this is technology is not only the heavy-duty machinery required but also the potential for side effects in the hands of someone who isn’t trained. So Igor and his team are looking into using low powered pulsed electromagnetic frequencies or PEMF instead.

Igor: With TMS normally, the fields would be very high. I mean, these magnetic fields are of so high intensity, approaching, for instance, 1 Tesla. It can not only influence, but it can provoke the firing of our neurons. This is an invasive method. While with PEMF, this is noninvasive. The organism can adapt to it and also refuse such influence if it is better for it.

Now what Igor mentioned here is a measurement of the magnetic field called a Tesla. To understand how powerful the PEMF devices are, let’s take a look at this scale.

Around 1-3, Tesla is where a medical grade TMS machine would function.

At 2.5 millitesla is where the PEMF device is – making it around 1000 times weaker.

So this made me question if it is powerful enough to influence our brain waves. And why not make it more powerful?

Braeden: TMS is magnitudes higher than that, but if you were to say, have like a 25 millitesla or 100 millitesla. Do you think that at that point, there is a certain level of danger there, that you’re starting to push into dangerous territory?

Igor: If you go to higher intensities like, let’s say 300 tesla – not Tesla – millitesla. Not 300 tesla, that’s murder. But let’s say 300 millitesla. There was a time, some 30-40 years ago, when I put my head into such a coil and really at the moment I felt very badly; it was really aggressive, something unbearable almost.

As Igor later explained in the conversation, they had found research showing that far weaker magnetic fields can still influence us. In fact, the Earth’s magnetic field has a strength of 30-60 microtesla, which is around 50-100 times weaker than the device. And research has shown that even this affects us.

Igor explained that the power isn’t as important as repetition and frequency. A single pulse of the electromagnetic field likely won’t impact us. But when it occurs repeatedly, at specific frequencies, the brain and body will start to synchronize to it.

So my next question for Igor was how impactful this PEMF device is on our cognitive state. Exactly how much of a boost can it give us? And the initial research they’ve done demonstrates how it can boost both relaxation and focus, depending on the protocol.

When using the device for focus, they noticed that participants made fewer errors during the sustained attention test. But more interesting is the direct influence it had on their brain waves. Using the PEMF device, they increased alpha waves and decreased delta waves compared to the placebo. So while the control group was growing increasingly tired and unfocused, the PEMF groups were likely sustaining their focus over the 30-minute test.

The strange part of the research is that they aimed to boost beta waves, which should have a stimulating effect. But the device actually led to a more relaxing effect than anticipated.

Igor: We found significant lowering of error making in a special task performed during the whole stimulation. But also we found the volunteers, they were more relaxed. This is interesting, you know, with attention. And we interpreted this that they actually used less energy when they were under this stimulation, and because of that, they could be more relaxed.

So judging from the research and conversation with Igor, I was confident that the technology has potential. I expected it to help someone fight off fatigue and sustain attention over more extended periods of time. But I wanted to put it to the test myself to see if I could actually notice it’s influence, especially during a long gaming session.

So I set up an informal self-experiment, which included two controlled gaming sessions on two separate days. And of course, I streamed the whole experiment. On each day, I had the same schedule. Everything was preplanned, from the moment I woke up to what game I played during each part of the day. I even controlled factors like what I ate, when I ate, and how much caffeine I consumed.

And on each day, I used cognitive tests, questionnaires, and brain scans to evaluate my level of mental energy, focus, and performance. Now, on day 1, I played without the headset, but on day 2, I used it throughout the training. And as a last-minute decision, I ended up streaming the whole thing.

So after two 8-hour streams, six cognitive tests, and four brain scans, I had my results. So let’s break it all down.

As for the brain scans, there were some mixed results, but one thing that stood out was the improvement in Theta/Beta ratio response while counting. This test measures these two specific brain waves when switching from a resting state to a cognitive task. If the ratio increases too much, it can indicate difficulty with focus, so we want to see lower numbers. In my last brain scan of the day, when my focus was at it’s the lowest point, there was a small improvement in this metric, bringing it from 31% on day 1 to 13% on day 2, which indicates a slight improvement in focus.

But with that all being said, let’s talk about my subjective experience. How did I feel with this device? During the experiment, I evaluated myself on my level of fatigue, focus, and performance with a questionnaire.

Overall I didn’t feel like my performance was that enhanced. Sure I may have performed a bit better during the games on day 2, but it just felt like this was me warming up to a game that was still new to me, not a result of the device.

I did, however, notice an improvement in my ratings of fatigue and focus. During the first half of each day, I felt almost equally focused and energized. But I usually hit a strong point of exhaustion around the late afternoon, which is when I noticed a difference. Again, I can’t say if I played much better on day 2, but I can say that I stayed more aware of my mistakes and felt it was easier to learn actively. To many, this may not sound like a significant benefit, but to me, this allowed me to get more learning out of those final hours of practice.

Now overall, I experienced some benefits with this technology. But of course, these effects were limited. The device didn’t induce a complete flow state, help me to absorb more information like the Limitless pill, or allow me to stay focused for 12 hours without getting fatigued. I wasn’t a godlike player, just my usual self with a subtle boost.

While this sounds a little disappointing, it’s actually quite exciting. This technology, especially as a consumer device, is just at its first stages of development. And one of the most exciting parts of my chat with Igor was when he told me about what’s coming up in the future.

While they’ve settled on a specific strength, for now, they may end up finding that something more substantial works better. While Igor expressed how a 100x stronger device may be uncomfortable to use, what about one that’s only 10x stronger? Or 2x stronger?

So ultimately, I don’t want to convince you of anything with this specific technology in its current form. What I do suggest is for you to keep your eyes open to the world of brain-boosting tech, and start doing your own personal experiments.

With more research, funding, and curious minds working on this and similar types of brain-stimulating devices, we will no doubt see more and more exciting tools in the future.

Right now, we are seeing the very start of it all. Today we can get small but significant upgrades in our training using electromagnetic fields. But in the not-so-distant future, we may be able to completely manipulate and upgrade our brains to perform, with superhuman ability on-demand. And once we can do that, we will truly become godlike players.