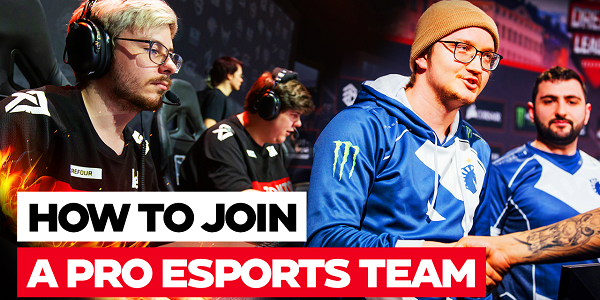 Making it onto a Tier-1 Gaming Team

Many competitive players look up to Tier-1 Organizations and dream of joining them.

And if YOU can make it happen, you’ll undoubtedly cement your name into the history of esports.

But the barrier of entry is massive. Pro teams only want the best of the best. And why wouldn’t they when they have their entire reputation on the line each season?

But climbing that barrier isn’t impossible…

Think about that for a moment, imagine you were trying out for a pro or even semi pro team. What do you think it is they’re looking for? Imagine you make it on to that team, what do you think you’d need in order to not get kicked off the team a few months later?

Most players assume that individual skill is the only thing that matters. Just focus on carrying as much as you can, getting more kills, or showing off you mechanics. But this mindset is a slippery slope, one that causes most players to fall off track and end their career before it ever really starts.

But if you’re serious about making it on to semi pro or even top tier teams, then its critical that you understand what it is they really look for when recruiting and resigning their players.

Fortunately I got a chance to sit down and talk to Dong-gun Kim (동건김), otherwise known as KDG. KDG is a former StarCraft pro turned Overwatch coach, who’s worked with tier 1 teams like Seoul Dynasty, Philadelphia Fusion, and now Toronto Defiant.

With the knowledge and wisdom he’s attained after coaching several Tier-1 pro esports teams, KDG has much to teach you about what it takes to make it onto a pro team.

His first tip is to start thinking beyond just pure mechanical skills.

So beyond just mechanics, there also lies game sense, judgement, and perhaps the glue that ties everything together: adaptability.

It’s important to not only know WHAT to do, but also WHEN and HOW to do. It’s not enough to have the best aim in the lobby. You need to know how to create a situation where your aim can truly shine. Who cares if you can win any 1v1 or maybe even a 2v1, it won’t matter if you’re blinded by a flash or constantly dying to flanks and well-timed peaks.

On top of that, you need to learn how to adapt, you need to learn how to be flexible. eSports titles are not static games. These games are ever-changing, the rules and metas are always shifting like a ground moving from under you. Those who lose their footing will fall, those who can barely keep their balance will stagnate, and those who can maintain their balance while moving forward will rise to the top. Even the stars will fall if they can’t adapt.

So now that you’ve shored up on your game sense and other skills, what comes next?

This is where having the right mentality can separate you from everyone else.

You need to adopt a “winning mentality”. It’s exactly what it sounds like, but it may be more complex that it initially seems. As KDG said “even when you struggle and you don’t want to talk to your teammates, you have to do your best for your team. If we have a game plan and that plan is to win, then we’ll put aside our emotions to solve the problems at hand.” And he’s absolutely correct.

The average pro player is very young, and many players will not have learned how to communicate effectively especially in a **team environment. Your emotions and feelings are important and they’re not to be disregarded and tossed aside, but understand that as a member of a team, you have to commit to the shared goal of the team: victory. Manage your ego and adopt that “winning mentality”. You might be able to carry all of your games now, but as the skill rating increases and the skill gap between you and your teammates decreases, who knows if you’ll be able to keep up? Whatever deficiencies there are in skill, they can be made up for in teamwork and communication. The key is to move past your ego and to not let your emotions cloud your thinking.

The “winning mentality” also entails working hard and developing a strong work ethic. It’s very cliche, I know, but part of adapting and growing as a player entails working through the obstacles.

Even Kobe Bryant never stopped working hard, so what makes you think that something like natural talent or some will of heaven will magically whisk you to the top of the leaderboard? You might be thinking that everything is okay if you perform well. As long as you’re winning, you can slow down, relax and not practice so hard. On some level this is true, but at some point, other people are going to catch up. If you want to be picked up by a pro team, then you need to show that you’re committed, not just to the game and the team, but to the hard process of improving. So be humble and work hard.

Why Korean Esports Players are so Good

Now when we think of the perfect image of hard-working esports players, one image that may come to mind are the Korean players that have dominated in League of Legends, StarCraft, Overwatch and other esports titles. Now by understanding a bit about the culture and mindset of these players, it might help you to take on some of their mentality for yourself. So what do these top Korean players have that those who grow up in other regions don’t?

So we learn from all that. And then every parent says that you need to make a result.

So if we decide to become a pro player, usually you have to put like your life into professional. Like not just for two years or three years or four years.

Because we learned that your life will decide from 19 until maybe 24 or 23. Because we have to go to – we have to serve army too, like military too. So we don’t have time. So you have a limited time so you have to put in your everything when you’re a pro player”

Korea has a strong competitive culture fueled by the unforgiving education system and the looming deadline of mandatory military service. These two things place their lives into a different perspective compared to what you’d see in NA. There is a finite amount of time to get things done, so in this Korean culture, every second counts! It’s not that NA’s talent isn’t there, but that the environment is not as conducive to birthing top-level talents. Just as diamonds are made under intense heat and pressure, Korea’s esports environment squeezes out the best amongst the best.

How to Get Signed to a Pro Team

So then what does it take for someone to get signed onto a team? And what can you do next to start moving in the right direction? Well, this is a complex topic with many different answers, but here are some things you could do according to KDG.

And then also, if you’re a good player, many players will already request friends. So you will find a good team as soon as possible.

I mean when you’re ready to be a good player. The most important thing is to prove your skill in rank.

Show your commitment and skill to the recruiters. Join competitive teams, whether it’s in local amateur leagues, a high school league, or a collegiate league. Put your name on the map and participate in whatever tournaments you can. Climb the ranks in your game, show the world that you have what it takes to be the best of the best.

If you think you should be Challenger, then get Challenger. If you think you don’t deserve to be in Gold, then climb and grab onto that Platinum rank. It’s not enough to just say you’re good, you have to prove it.

But as you prove yourself, adopt that “winning mentality”, do whatever it takes to WIN rather than just perform individually or listen to your emotions.

As you do this, make friends in-game, expand your network. If you’re playing amongst the top 5% of all players, then surely one of them will end up playing for a team, whether it’s a Tier-1, Tier-2, or Tier-3 team.

So take all of this into account and use it to direct your own esports journey. Avoid the pitfalls and poor mindsets that hold others back, and focus on KDG’s advice. With it, you’ll get a leg up over many other players, and you’ll get yourself one step closer to playing on a pro team.