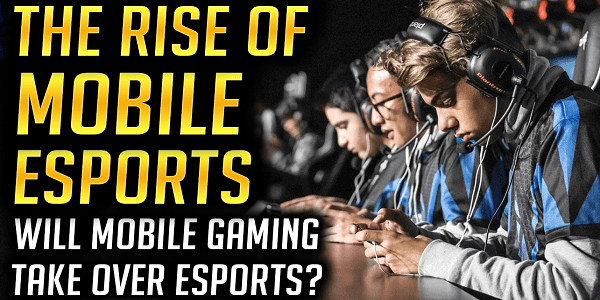 Mobile esports might just become the future of esports…

Games like Pubg mobile, Call of Duty mobile, Arena of Valor, and Clash royale have massive fan bases and are pulling in millions of dollars in revenue. Developers like Riot are catching on and shifting their attention towards creating mobile versions of their games.

And even traditional esports organizations have joined the trend. Popular teams like Fnatic, Immortals and SK Gaming have all established teams under popular mobile titles.

But while mobile gamers are already well aware of how big mobile esports can become, traditional esports fans are just starting to realize it, and might be a little skeptical. How can games that are less developed and played on less hardware, attract such serious players and fans?

Well, the key to this rise in mobile esports is accessibility. Not everyone can afford a high-end gaming computer or the latest console. But nearly everyone has a smartphone and access to Wi-Fi. And in developing nations with the largest populations, this couldn’t be more true.

As a result, mobile gaming is pulling in massive numbers. And this is only the beginning for mobile esports. So with rapid growth in mobile esports, could this mark a shift away from PC and console gaming? Will mobile completely take over and spark a new era for esports altogether?

Now as mobile gaming continues to take over more and more market share, out-earning PC, and console gaming does it mean that it can also take over in esports? Well, let’s look at one of the most important metrics when determining an esports success – the viewership.

So in comparison, the top games in mobile aren’t pulling in nearly the amount of watch time that PC and console games are getting.

But this likely isn’t as big of a problem as you might think… Mobile esports companies are making much of their revenue off of in-game purchases which means money comes from players not viewers. To them, esports isn’t a means to making money in itself, but a way to get more attention, and deeper engagement form their fans which ultimately leads to more in-game spending.

In fact, even with lower viewership, the mobile game Clash Royale had set a record in 2017 for the most entrants into an esports event ever, with more than 27 million players participating for a $1 million dollar prize pool! This shows how accessible esports are becoming through mobile, and shows how even through lower viewership, mobile esports will continue to grow based on engagement and participation.

THE SHORTCOMINGS OF MOBILE

Of course, where you find esports tournaments like this you will find large esports orgs trying to get involved. For example, in the Clash Royale League, you’ll find big names like Immortals and Team Liquid. Hearing this adds a bit of legitimacy to the scene. But you’ll also notice how other big orgs have begun to disband and drop out, including Team Fnatic who left the Clash Royale scene in early 2020.

To add salt to the wound for mobile esports, even some developers have failed to keep their interest in esports including the developer of the mobile MOBA Vainglory who stepped back from esports development in 2019.

And unlike the esports scenes around popular PC games like Dota, League of Legends and Counter-Strike, the esports scenes in mobile games appear to be relatively short-lived and much more spread out. Whether this is the result of people constantly discovering new and exciting mobile games or the lack of event viewership, it’s hard to tell. But this shows developers that they need to treat mobile esports far differently than traditional esports. Perhaps they will focus more on engaging amateur players than trying to form franchised leagues.

But one theory as to why esports around mobile games hasn’t stuck as well, is simply because they aren’t as fun to watch. This may come down to how well the games look or how much complexity a developer can fit into a game that’s designed for mobile hardware. If this is truly the issue then things might be about to change drastically in favor of mobile esports.

As much as we’d love to predict the future of mobile esports, it’s going to be much harder as mobile technology gets a massive upgrade over the next 5 or so years. Undeniably, 5G is one of the most exciting developments in mobile technology. When it hits the mainstream, it will give way to a whole new era of esports with cloud gaming at the forefront. While many countries have already begun to implement 5G technology in their major cities, we are still likely a few years away from seeing a full 5G rollout, and a few extra years from seeing developers implement it effectively. But with the promises of playing AAA games on-the-go, mobile esports will become far more interesting to play and watch, potentially solving many of the problems that are now holding it back.

SO WHAT’S THE DEAL?

There’s a low cost of entry to get into mobile esports, AND it’s clear the player base is spending enough money to get developers thinking about mobile esports. In fact, with billions in revenue, millions of players, and viewers and passive pushes to build esports infrastructure around rising mobile games it’s hard to deny that a long-term scene is forming.

But can mobile esports sustain in the long run? Can it compete against the success of PC and console esports games?

While I’m not yet confident that individual mobile esports will create long-standing esports scenes at the scale of PC games like League of Legends and Counterstrike, I do believe it will continue to forge its own niche, and ultimately play a huge role in the growth of all esports.

You see, with younger generations getting access to phones and tablets far faster than they get access to high-end gaming computers, they will be much more likely to have their first esports experience in the form of a mobile game. Similarly for areas of the world that are still developing, having access to mobile games will be much more common than PC games allowing esports to grow in nations where it would otherwise be inaccessible.

And with the rise in cloud gaming and 5G technology, this accessibility will only become greater.