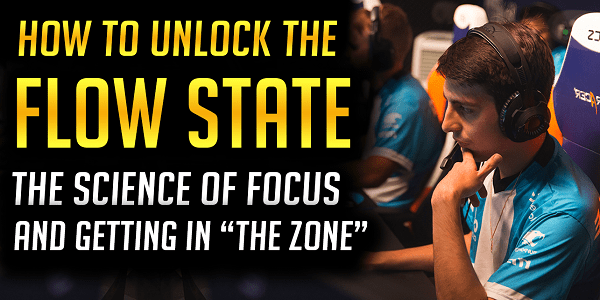 What could you achieve in esports if you could access superhuman brainpower?

In popular media, the idea of superhuman brainpower has been popularized alongside the idea that humans only use 10% of their brains. And if we could access all of it, we’d be able to achieve a level of genius equal to a super-power.

While this 10% idea is scientifically inaccurate, there is a good reason why it sounds almost believable.

In our day to day lives, we operate at a very average level of mental productivity and clarity. But every once and a while we’re able to snap into a mode of god-like focus, where everything we do feels to flow out of us, we’re more energetic, motivated and we’re able to achieve our greatest in-game results.

But of course, this mental state is fleeting. Sooner or later we are back to our baseline level, feeling like a mere mortal once again.

When you transition from feeling slow and fatigued to god-like focus, it’s easy to feel like you’ve suddenly accessed 10x more of your brainpower.

Counter to the idea that greater mental performance requires us to use MORE of our brain, the research shows that in a state of flow, you’re actually using LESS of your brain. The brain shuts off structures that aren’t needed and uses the extra energy to power your focus. The result is a complete loss of time and a sense of self. You become so focused on the task that everything else vanishes.

Locking into the zone like this comes when your brain feels it is absolutely necessary to perform when there is a high demand for performance with large risk or reward and the confidence and skill to match it. For example, playing a high-stakes esports match against equally skilled opponents for a single shot at victory, all while on stage in front of all your biggest fans and critics.

But it’s not every day that you personally are playing on an esports stage. So is this state of mind out of reach for you?

Well, here’s what’s interesting about this mental state. It is far more common and far more accessible than you might think. And if you’re able to figure out how to tap into it on demand, it could very well alter the course of your esports journey, bringing you to levels of skill you never thought were possible.

Exactly what happens in the brain during flow?

In an early attempt to figure this out, researcher Mihaly Csikszentmihalyi used electroencephalography (EEG) to measure the brain waves of expert chess players during a game.

He found that the most skilled players showed less activity in the prefrontal cortex. What’s strange about this is that the prefrontal is important for planning complex cognitive behavior and decision making, which are both important during a strategic game of chess.

That may seem counter-intuitive, but follow up research measuring brain activity during flow shows similar results. So what’s happening here?

When you enter flow, your brain shuts off non-critical structures that are draining your capacity for focus. And the biggest drain of your focus is a very specific network in your brain called the default mode network.

This is a network of interacting brain regions that becomes active when you are not focused on the outside world. It becomes less active when you are focused on a task or something specific within your environment. But when you lose focus and turn your attention inward, the default mode network becomes active with self-referencing, pondering the past and future and general mind wandering.

This network of the brain is likely of huge importance when it comes to remembering past events, thinking about others, and understanding one’s own self. But it is also the barrier that’s stopping you from entering flow.

So how do you lower activity in the default mode network so that you can enter flow much more readily?

The idea of actively changing your brain’s structure and activity is a little crazy, especially when you’re just trying to target a single network within it. So can it be done?

A research team at Yale, lead by Judson Brewer studied meditators and measured their brain activity. They showed that their default mode network has less activity… not only during meditation but all the time. In other words, they completely changed their brain’s standard mode of operation to be less distracted and more prone to flow, simply through meditation. (https://www.ncbi.nlm.nih.gov/pubmed/25904238)

So if you want to break down the barrier that’s holding you back from flow, then the key is meditation.

But beyond taking control of your mind and priming yourself for flow, meditation has also shown some amazing benefits when it comes to memory.

Two parts of the brain that are highly active during memory storage and recall, are the Hippocampus and frontal lobe. Both of these brain regions are stimulated during meditation.

In fact, in 2011, Sara Lazar and her team at Harvard found that mindfulness meditation can actually change the structure of the brain: Eight weeks of Mindfulness-Based Stress Reduction (MBSR) was found to increase cortical thickness in the hippocampus. (http://www.ncbi.nlm.nih.gov/pmc/articles/PMC3004979/)

In other words, their memory storage center literally grew in size over the 8 weeks! So by training with meditation, it can enhance your ability to memorize, store, and recall large sums of information. And the implications for an esports player are huge! By physically growing your mental storage for information, you’re able to absorb more game-knowledge at a faster rate, allowing you to develop your understanding of the game to a level most players can’t access.

So with the single habit of meditation, you’re able to slowly hone your focus ability to enter flow, and over time physically change the size of the memory storage in your brain.

But here’s the thing. Just telling you about this is only going to give you a short term boost of inspiration, and won’t actually lead to any long-term impact on your actual performance, unless you put it into action and start building a meditation habit…

Now when it comes to building a habit there are 3 keys:

1. Make it easy to start doing by using some sort of meditation app or game…
– Guided meditation is by far the easiest way to learn how to meditate. For years I’ve personally bounced between popular meditation apps like Headspace, Calm, and Waking Up. There are tons of options out there and I’d recommend trying the free trials within each of them to see which you like the best. I encourage you to unlock your phone and start downloading some of them right now.

2. The second tip is to build meditation into your daily routine so that you’re reminded to do it at a consistent time. For example right when you sit down to start a gaming session immediately start by priming your brain with meditation. At first, you might need to set a reminder on your phone, but over time you’ll feel automatically reminded to do it every time you sit down and turn your computer on.

3. The third tip is to make it immediately satisfying. After the meditation is done, give yourself a few moments to sit in the feeling of relaxed bliss, let yourself smile and enjoy that moment before moving on too quickly. Then as you start playing, enjoy the feeling of increased focus and awareness.

This might sound trivial, but it’s easy to treat meditation like another task to complete and move on from it without letting yourself enjoy the feeling it gives you. But the more you pay attention to the effect it has on you the more rewarding it will become. And if meditation is something you get instant gratification from, then it will become a part of your routine that you look forward to each day.

Another method for making meditation more immediately rewarding is to play some sort of meditation game where you unlock new aspects of the game the more you meditate.

Meditation is a key factor for letting you access your brain’s full potential – it can help you access a state of accelerated learning, heightened focus, and even a complete flow state.

Building the habit of meditation takes a little effort, but if you make it an enjoyable part of your routine then it will naturally stick. And over the next few weeks, it will literally change your brain. You’ll notice this as you start to think and feel a little more different each day. Perhaps you’ll feel less distracted, less stuck in your own head, and more mentally clear when learning. Over time the effects will become even stronger.

And the implications of this are beyond just a small boost in your skill, it’s a multiplier that will make all your training efforts far more effective.