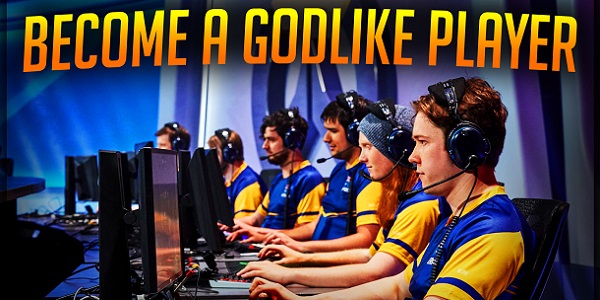 When we see godlike, amazing players in the pro scene, we’re inspired and filled with the desire to become just like them. But, these players seem untouchable as though they are playing on a level that we can’t even fathom. And the only explanation we have for this is that they must have been gifted with some god-like ability.

But in truth. Achieving a high level of skill in competitive gaming is possible for almost anyone, the same way almost anyone can learn to drive a car. In either case, we are simply learning a skill – We’re feeding our brain with information and applying it until it becomes automatic. So how exactly can you learn this skill, and become a godlike player? Well, that’s exactly what I’ll continue exploring in this video.

In part one of this guide, I broke down the first stages of skill development, inspired by Stuart Dreyfus’s 5 Stage Model of Skill Acquisition. In this video I’ll continue where I left off, demystifying the process of becoming a godlike player, and showing how even you can develop a high level of skill and become a pro.

During the first stage, the one I like to call the Student stage, you learned to open yourself up and master the fundamentals. You developed a strong understanding of the game’s many elements and rules. To do so quickly and to fight off burnout, you kept things fun and competitive, making a game out of your early lessons.

During the Scientist stage you were forced to make your own decisions, no longer just executing actions on the basis of another’s rules and maxims, but creating your own for each unique situation. As a result, your mind absorbed the information of each decision, processing it’s meaning, and emotional weight, then ingraining it into your memory.  With more experience like this, your brain begins to process information faster and faster. Now you’re able to identify important and unimportant elements without even thinking, instantly matching each sequence of the game with familiar past experience, thus allowing you to quickly identify possible decisions and potential outcomes.

This is a sign that you’ve reached the third stage of your skill development, what I like to call the optimizer stage. At this point, your main objective is to invest large amounts of time and effort to perfecting your performance and optimizing every decision and every action. By now you’ve developed your skill to a point of confidence. But you’re still making some bad decisions and figuring out how to optimize your skill execution.

For example, you might be able to identify an opportunity to all-in without even thinking about it. You’ve subconsciously taken into account his health, level, abilities, teammate’s positioning on the map etc. and as a result you know you can all-in and get the kill. But you don’t know the best way to do so… You know you could try to get another poke off before you all-in so he has less health and you have a greater chance of getting the kill. But you know this could be risky, because he might suddenly realize that you can all-in him, forcing him to go back. Alternatively, you can all-in him immediately. You know that you’ll probably get the kill, but you’ll have to tank at least one or two shots from the turret, making it a bit of a close call. You decide to play it safe and poke him once more before you all-in. Almost immediately he starts to head back to his base, meaning you missed the opportunity to get the kill. You realize it wasn’t the best decision, and if you tried to just kill him you probably would have succeeded.

For example in the previous situation, you realized you could all-in him right away or poke down his health a little bit before you committed. What you didn’t take into account was that a new minion wave was just arriving. Since he saw them coming onto his screen right after you hit him, he realized he could go back to base, heal up, and return to the lane without leaving his turret too vulnerable. Similarly, you realize that since a fresh wave of minions had just been arriving, this added a whole new factor to alternative plan to go all-in for the kill. This new wave would have been able to cause enough damage to you while going all-in to likely lead to your death. So despite both plans being fairly good in most scenarios, this one subtle detail threw them both off.

Unfortunately, it’s easy to miss these important details when we’re wrapped up in the game. So the best way to learn about these subtle details, and improve your decision making, is by reviewing your matches, especially your bad ones. It is from your mistakes and failures that you can learn the most, and while it may not feel great to lose, you should feel genuinely excited to extract from them valuable insights.

But of course constantly fixating on your failures can be stressful, so don’t forget to review your successes as well. It doesn’t hurt to be aware of your strengths, and sometimes you need to pat yourself on the back for a job well done.

So at this stage, you’re the main focus is on optimization – you’re constantly optimizing your decision making, reviewing games to identify small and important details, and honing your execution of specific skills. And since all of your focus is going towards these optimizations you’ll naturally be motivated by getting better instead of winning.

Unfortunately, too many players try to force an optimization mindset too early. And if you’re still trying to master fundamental rules, then studying frame data, reviewing your games in detail and spending hours in a bot match won’t be much fun. But once you’ve achieved a high enough level of skill, you will be naturally attached to your skill development and be playing at a high-stakes level. As a result, any hint of improvement and every small optimization will feel extremely rewarding and motivate you towards further improvement. So pay attention to this and don’t force optimization if it begins to strip away your motivation!

The result of the three stages we covered is what Stuart Dreyfus would call an expert. The expert can identify and automatically react to very specific situations with complete precision. Due to their level of experience and amount of practice, the expert knows how to perform the appropriate action in nearly any situation, without calculating and comparing alternatives. In their subjective view they simply just “know” what to do, then execute it accurately.

But in any competitive environment, an expert will discover other experts. This will force them to adapt and continue improving. But at this stage they are already fluent in their execution and making great decisions in-game, so how will they improve? Well, the answer to this is in further optimization and constant innovation.

The first key to this stage is in revisiting the optimization mindset. But this time you are truly optimizing the smallest details. In fact at this stage, you will most likely outside perspectives like coaches and analysts to help you discover subtle weaknesses in your game, so subtle that you wouldn’t notice without them on your own. This is why coaches and analysts exist at the highest levels, because at this point in player’s skill development, every small optimization makes a major difference. This forces top-level coaches and players to think outside the box, to look for often overlooked areas of the competition, that hold huge opportunities for improvement. Examples of this include optimizing health, diet, and performance psychology. By optimizing yourself both in-game and out of the game you’ll be able to not only make small personal improvements, but you’ll advance just enough to put you ahead of the competition.

The second key to this stage is innovation. A player at this level is already fluent and effective in their performance, so to get an edge on the competition they need to innovate, develop new strategies and techniques that the opponent didn’t even know was possible. This is why I like to think of the expert more like a linguist or an author. At this stage, they are fluent, effective, efficient, and well-regarded due to their seemingly natural level of skill. But like an author who is good with language, there is always a new way to combine the words. And when it comes to a skill in a realm of competition, constantly innovating strategies and techniques is a requirement to stay on top.

So when you reach this stage you must create new strategies, new styles, and new techniques. You must optimize yourself both in-game and out of the game. Only then will you be able to stay on top and achieve a godlike level of skill.

The result of these stages of skill development is a player with the potential to dazzle others with their god-like ability. For others, this skill is like a foreign language, that they are just beginning to learn. But to the godlike player, this language is now easy and fluent. For them, the only difficulty is finding unique ways to use it.

But much like the godlike player, we can learn this language. We can use the process of skill development to achieve fluency in our game of choice. Then we can use this fluent skill to make it to the big stage, to inspire those around us, and make everyone believe that our earned skill is some sort of gift from the gods…