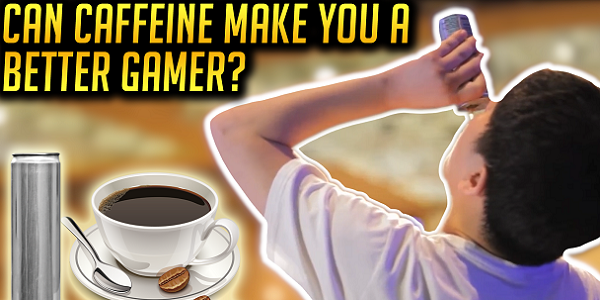 In the prestigious evolution tournament of 2011, and underdog contestant, Poongko, was set against the fighting game master and returning champion Daigo Umehara.

Despite him being the underdog, Poongko walked onto the stage with a sense of focus and confidence. And right before the match, he stole the crowd’s attention by aggressively throwing off his jacket, and downing an energy drink.

He then proceeded to dominate Daigo, ending the set with a perfect round. And of course, the crowd went wild!

For a competitive gamer, this is not only an interesting moment because an underdog beat a returning champion, it’s also interesting because it puts a spotlight on the key ingredient in Poongko’s energy drink – caffeine! If Poongko can chug some caffeine, then defy the odds and dominate the returning champ, then it raises the question if caffeine is a superpower in the world of eSports…

Or maybe a better question is whether the opposite true? Is Caffeine actually bad when it comes to gaming performance, and did Poongko win despite the caffeine kick rather than winning because of it?

Well because of how popular Caffeine is in esports, it’s worth it to really dive into the science and see whether it’s helpful or not. So in this post, we’ll break down what caffeine really does to you, exploring its benefits, and exposing its negatives. Then we’ll be able to really see if Caffeine is a superpower that you can use to get ahead or if it’s actually something that might want to avoid altogether…

It’s no secret that many of the top competitive gamers use caffeine. And if you’ve ever had a cup of coffee you can definitely vouch for its stimulating effects. But is Caffeine really beneficial when it comes to gaming performance? In order to really answer this question, let’s take a look at how it works and explore its positive and negative effects.

Caffeine itself is found in a number of natural sources, most notably coffee and tea. And in esports, it’s most commonly found in energy drinks. So when you drink that coffee or energy drink, Caffeine enters the bloodstream and goes to your brain, where it acts as a replacement for a brain chemical called adenosine.

The role of adenosine is to basically make sure that your nervous system doesn’t become over-excited or run out of control, and it plays a big role in calming you down and telling making you feel tired.

Caffeine is actually thought to mimic adenosine in the brain, attaching to the same receptors and then blocking adenosine from working at all. This causes a stimulating effect upon the brain and central nervous system and heightens the level of chemicals like adrenaline and dopamine.

And this all results in some serious positives for performance boosting.

So by drinking a cup of coffee or taking a caffeine supplement, you may be able to perform with greater focus, faster reaction time, improved memory and a greater mood. But before I make Caffeine sound like a miracle substance for gaming, it’s necessary to point out the downfalls of caffeine. Because, while Caffeine can give you a boost of stimulation and improve some areas of performance, it often overstimulates and causes some negative effects that might just outweigh the positives…

But what about the benefits? What about the benefits on focus, energy, mood and reaction time? Do the negatives of caffeine outweigh the positives for gamers? Well there are a few answers to this question. First it’s worth noting that everyone’s biology is different, and some people will experience more of the positives and some will experience more of the negatives. But the more interesting answer is that there is a way to experience Caffeine’s positives while countering many of it’s negatives. To do so we simply need to balance it with another ingredient, an ingredient that you’ve likely never heard of. This mystery ingredient is called L-Theanine.

L-Theanine is an amino acid analog, found mostly in teas, like Green Tea. It works by inhibiting the binding of the neurotransmitter glutamate, to specific neuronal receptors. Since glutamate is known to increase during stress, the inhibition of glutamate receptor activity is thought to cause anti-stress effects.

Another method of action is L-theanine’s effect on brain your waves. Supplementation with it has been repeatedly noted to increase alpha-waves in the brain. Alpha-waves (8-12Hz) are known to be associated with relaxation, selective attention and mental alertness.

But how does L-theanine take away the negatives Caffeine?

A handful of studies show that L-Theanine reduces stress as well as the cognitive deficits caused by stress, meaning the anxiety effect of Caffeine may be reduced by L-theanine. And when the combination of L-Theanine and Caffeine was compared to caffeine on it’s own, the combination significantly improved Caffeine induced jitters and body tension. Thus, L-theanine may balance out Caffeine, countering the negative effects on motor function.

On top of this, L-Theanine has also been shown to benefit memory by significantly improving accuracy in memory recall and working memory. Thus, L-theanine may even counter negative effects Caffeine can have on your memory.

So L-theanine appears to balance out the stimulatory effects of Caffeine, warding off anxiety, improving your memory and countering the jitters that ruin your in-game accuracy.

So in revisiting the initial question: Is Caffeine is a powerful tool in the realm of competitive gaming? Well, the answer is yes and no. The positives of Caffeine are amazing… but the negatives might just ruin your performance.  And those competitive gamers who use caffeine often, but rely on coffee or energy drinks, may getting an energy boost, but they’re trading off key areas of their performance. But by combining Caffeine and L-Theanine, we get, what appears to be an obvious performance booster for competitive gamers. And it’s a combination that I’d suggest trying, especially if you’re the type who uses coffee or energy drinks as a way to boost your gaming performance!

But, of course it’s worth noting that this combination isn’t going to instantly make you a high skill player. Nor will it guarantee you can win every game. What tools like these can provide is an extra boost towards better performance and faster learning. Think less like a limitless pill, and more like an upgraded cup of coffee.

That being said, don’t underestimate the power of a small advantage, especially in the realm of competition. In this realm of competitive gaming, slight differences in reaction time, learning ability or decision making can separate a decent play from a great player. And any small advantage that you gain, whether it’s a performance tool or, a new strategy, may just give you the edge you need to reach the next rank, win the tournament and achieve higher level of success as a competitive gamer….