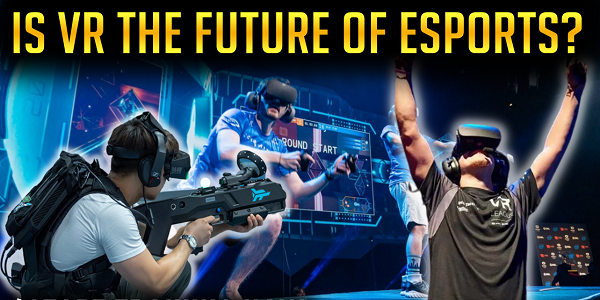 To start answering some of these questions, it’s important to look at where VR esports is at to see if it’s really worth paying attention to.

Now think about the grandest Sci-Fi versions of Virtual reality, from Tron and the Matrix to Ready Player One. In these movies, characters are quite literally transported into digital worlds where they can live incredible lives, have experiences beyond our imagination and participate in games & quests far more thrilling than anything we can experience in our day-to-day existence.

Then in 2012 when the Oculus was first announced, these kinds of SciFi stories started to become a bit more real. Suddenly the mass public became aware that it wasn’t as far-fetched as we once thought.

And today, we continue to dream about a near future where we can enter astonishing inner worlds and play a part in stories, quests and games as interesting as what we see in movies.

But how could this all change the esports landscape?

Well it’s obvious that esports is accelerating in popularity, with games like Valorant and League of Legends picking up more and more steam each year. But eventually, this will collide with virtual reality. No longer will you be looking at the game through a window called a monitor, instead you’ll actually be inside the game, fully immersed.

But ten years after the Oculus was announced, we now find ourselves still in the very earliest stages of VR and VR esports.

Sure the technology has improved dramatically. In fact, when I first strapped on the PlayStation VR headset, I simultaneously became aware of the potential of VR and just how poor the experience will be before it’s fully optimized. After 60 minutes of playing Skyrim, I recall being blown away, yet sadly nauseous.

Of course over just a handful of years later, the technology has now gotten cheaper and better. But that doesn’t mean it’s ready for the mainstream. Its still unlikely that VR will be as common as even consoles in the coming years. But why is this? Well VR esports has two major problems right now – to understand them, consider the following questions:

Why are mobile games leading the entire gaming industry in terms of revenue? And what got you to buy your first console or gaming PC?

Of course, if you already have a phone, it’s easy to download apps and play them there. And if you’re ready to step up and buy a console or gaming PC its because there’s at least one game that caught your attention, whether you got your first console for Halo or God of War, or your first gaming PC for Fortnite or Valorant.

Now, unfortunately, these highlight the two largest problems for VR esports. There just aren’t that many people who can afford to get into VR, and because of that, there aren’t a lot of developers willing to invest the time and money into developing VR games. So it’s a bit of a chicken and egg problem that has led to VR esports remaining a very niche activity despite the improving technology.

But there’s a silver lining here. The first hurdles have already been overcome. The technology and its potential are now too obvious to ignore. And so companies like Google, Meta & even Apple are pouring billions of dollars into the development of VR & AR technology. As it happens, we’ll see increasingly sophisticated headsets at cheaper and cheaper price points. We’ve already seen an influx of VR users with the $400 Quest & Quest 2. But consider how much that will increase when those standalone headsets are twice the quality or when the new generations of wireless PC headsets are affordable to the general population.

As this happens, more and more developers and investors will pile into the space.

And so, if you desire to be a pro-VR gamer, you’re going to need to be ready for when that wave comes. If your skills are trained up, and you’re prepared for the first great VR esports games, then getting to the pro stages will come easily when competing with all the new and inexperienced competitors.

So should you get involved in VR esports now, or is it too soon?

Well, like I said, the VR esports scene is still quite far from being as mainstream as current-day esports games, but the earlier you get involved, the more prepared you’ll be.

And of course, if there’s less competition even now, it means a greater chance of success within the tournaments and leagues that exist today.

For example, consider how many people are actively playing CSGO today. Checking the data we can see a peak of nearly 1 million players in the past 24 hours. (https://steamdb.info/app/730/graphs/)

Now let’s say that’s your competition, a million other players to get ahead of if you want to be the best.

This is where the untapped potential of VR esports comes into place.

With VR tournaments and leagues like the Vail Pro League offering up to 35,000 in prize money, and such a low number of competing players, you might have an incredible opportunity to achieve your esports goals of turning skill & passion into tournament success and cash prizes.

So then comes the question; how can you train to become a tier 1 professional VR esports player?

Well, the first step is to identify the games that offer the greatest opportunities. As of today, many of the top VR esports games are shooting games. So if your goal is to compete as much as possible in tournaments with prize money, then I’d recommend choosing a game like Pavlov, Vail or Blaston as a primary game. But consider the others as secondary ones to also compete in. Of course, the mechanics will differ from game to game, but a lot of the muscle memory developed for aiming as well as other skills will transfer between them, allowing you to become a competitive player in each.

But what skills should you be training? And how should you train them?

Well, first consider what skills you’d train in a typical FPS game. Then also think about how VR games will differ.

For example, in a game like counter strike, you will train your hands and fingers for aiming skills. In VR you’ll want similar aim-training practice but will be focused on larger muscle groups in your arms and shoulders.

But you’ll also need to train different skills altogether, such as transitioning from running or reloading. Unlike traditional FPS games, you won’t have a crosshair on your screen at all times, you’ll need to move or reload with your gun away from the center of your screen. Thus you’ll need to practice your speed and accuracy of pulling the gun up and shooting.

And of course, seemingly basic skills like throwing grenades, crouching and corner peeking will all require completely new muscle memory, which will require tons of isolated practice to master.

But much of what we discuss on this channel and what you’ve learned from skill development in other games will apply here as well.

The vast majority of players in any game, especially in VR games, will rely solely on playing the game over and over again and hoping that they quickly improve.

But with a more practical, planned and purposeful approach, you can improve your skills much faster.

The first step is to identify all the skills in your game that you need to master. Break it down into core fundamentals like communication skills, peeking, movement, recoil control, target switching, macro strategy and so on.

The next step will be to identify ways to effectively practice each of them. For example, using VR aim trainers, modded maps, doing metronome training, and playing in scrim environments with your team.

Taking the simple steps to set training goals and identifying ways to effectively practice each skill sounds simple, but again the vast majority of players are too lazy to do it, meaning it’s an easy way for you to gain an incredible advantage!

Now a few bonus training aspects to keep in mind are speed, fatigue and transfer from non VR games.

– In many of these VR games, movement speed is a big deal. So consider practicing aiming drills that force you to move at faster and faster speeds to improve your fast-twitch muscle and reaction speed. Similarly, if you want to take a break from your primary game, consider games like Beat Saber that force you to improve your arm speed and agility.

– Then, consider the aspect of fatigue. Near the end of a full gaming session, you’ll be less accurate due to fatigue. This is something you’ll need to get used to for larger tournaments. So if you have an aim-training session, I’d recommend doing part of it at the end of your gaming session when you’re the most tired. Learning to be accurate while fatigued will give you a significant advantage over other players.

– And finally, consider non-VR games that can help you in VR. CSGO, Valorant and similar team-based FPS games can easily help you think more intelligently than their VR counterparts. The same goes for battle royales and other genres that transfer.

Now earlier in the video, I described my simultaneously exciting and disappointing first VR experience. But I didn’t describe my second. A few years ago, I had given VR a second chance when borrowing an Oculus from a friend. The days after, I got sucked into VR. I had become jaded by my lonely pandemic life, staying indoors day and night with little connection to my friends or family. But the escape into VR felt real and exciting. I joined amazing communities in VR chat, got mildly addicted to rhythm games and found enjoyment in training new VR esports skills. But even then, I still didn’t think that the VR esports scene was that close.

Then in researching this video, I went from a non-believer to an excited enthusiast in a matter of days.

– I saw videos of incredible players like FNH8IT dominating in Vail. (https://www.youtube.com/watch?v=d1YNCRrsptI&ab_channel=FNH8iT )

– Pro teams on stage at the VR League Finals. (https://www.youtube.com/watch?v=vOxwgGebWbM&t=1245s&ab_channel=VRLeague )

– Population One team Vortex use teamwork and synergy to earn a well-deserved victory. (https://www.youtube.com/watch?v=Pbz65p7YXFY&ab_channel=Sumatchi )

Seeing all of this, I realized that even though its early days, VR esports is here!

Anyone who’s tried VR recently likely understands how well it can take you out of this world and into a new one; the immersion is powerful. And that immersion mixed with esports seems like the perfect combination.

Of course, VR esports won’t break into the mainstream or cannibalize the rest of the esports scene anytime soon, but it doesn’t mean it’s something you should ignore. In fact, now is a great time to get involved.

Developing the physical skills and muscle memory now can put you in the right position to catch the wave when it comes. Plus, as big companies and sponsors start to pay attention and get involved in the VR hype, it will mean increasing prize pools with relatively small competition compared to traditional esports games.

So whether you’re already playing competitive VR games or just considering it, I encourage you to give it a shot, and to do it well. Pick your games, create a training plan, build a squad to play with and get involved in the VR esports scenes that currently exist. As a result, you’ll be one of the first in this exciting new scene, one of the first real VR esports players, and a true pioneer to virtual reality and esports.