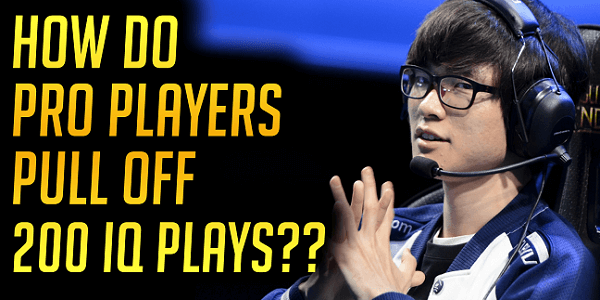 When it comes to major international tournaments, all eyes tend to be on insane clutch plays that solidify a player’s reputation as a legend.

Such plays require an insane amount of game knowledge, information processing, and creativity.

There is simply nothing more impressive than watching xPeke barley escape a dire team fight, then curiously hide in the jungle while the enemy team makes a push towards his nexus, only to enter their base on his own and pull off the most legendary base race of all time!

Or similarly watching players like Saebyeolbe reversing a 6v4, through strategic targeting – flanking the support, taking out the isolated tank, getting rid of Dva, then leaving the main fight to take out Boston’s utility, before coming back to finish off Boston and claim the victory!

While most players chalk this up to some elusive “instinct” or “genius”, these terms don’t really tell us much about the true underlying mechanism behind these plays.

So in this video, we’ll dive into the mind of an esports legend, to identify the true nature behind their 200IQ decisions. And we’ll uncover the truth of how players like yourself, are able to develop the genius and instinct of a pro-level player.

How Does The Skilled-Brain Work?

To understand the genius behind top esports pros, we need to start by understanding how exactly the human brain works, when it comes to our gaming decisions.

Our brains are essentially bundles of wires – 100 billion wires – called neurons, each connected by synapses.

The simplest action like attacking an exposed enemy – involves a circuit made up of hundreds of thousands of fibres and synapses.

Fundamentally, every one of these circuits works through an input output mechanism.

The input is all the stuff that happens before we perform an action: seeing the vulnerable enemy, feeling our fingers touching the buttons, then making the decision to attack.

The Output is the performance itself: the signals that move the muscles with the right timing and force to press the right combination of buttons, allowing your character to move towards the enemy, and efficiently attack.

Now, this is just a small and simple example of the mental processing involved in any esport.

In an actual game, you are constantly in dynamically changing situations, which involve constant task switching, and information processing.

And when we look to a high-level player, they are constantly analyzing and processing tons of information – such as their current position, the movement of their teammates, the various items or weapons that the enemy has, their own character’s ability, and how that matches up against the immediate enemy.

In a game like Overwatch or League of Legends you can get an idea of how much information exists, by considering the possible combinations of characters abilities and map areas where an engagement can happen. When factoring in these sort of elements, the amount of permutations in a game like this, reaches the millions.

And in any given situation, pro players must calculate all the various elements, permutations and possible outcomes in order to make a complex decision. And more impressive, they must often make these mental calculations in mere seconds!

But how is this possible? How do they make so many calculations so fast?

Well, the human brain is constantly developing complex mental circuits which allow us to execute skills, and store game knowledge. And, the more we develop a certain circuit, the less we’re aware that we’re using it. In other words, once we develop a strong enough understanding of certain knowledge or skill, we store it in our subconscious, making that skill and knowledge automatic.

And this creates an elusive feeling that a skill once gained, feels completely natural as if it’s something we’ve always possessed. When we use phrases like muscle memory, instinct or natural skill we are actually referring to the mental circuits that have been optimized and are able to fire without us thinking.

And so when a pro player is in a unique situation, analyzing all the elements of the game, and calculating their next moves, most of this is happening without them even realizing, and if you were to ask them why they made a certain play, they will often say that they were acting off instinct or a gut reaction.

So this still leaves us with the question – how exactly do these players develop their abilities to a point where it is mostly subconscious?

The Process of Chunking – How can you develop this genius?

The hard truth is that pro players are able to make these connections and pull off such great plays because they’ve invested thousands of hours into the game, and their mental circuits have developed from tons and tons of past experience.

The silver lining to this is that we can shortcut this process.

Most of us learn through simply playing the game over and over. And this definitely helps build a slow progression of experience and knowledge. But through the process of playing in the same way, and executing the same set of game knowledge and skill over and over, we fail to expand our mental circuits. In other words, without actively expanding or skill set and knowledge, we really aren’t improving very fast.

Skills consist of identifying important elements and grouping them into a meaningful framework. The name psychologists use for such organization, is chunking.

And to develop your skills and knowledge quickly, you must actively develop these mental chunks until they become subconscious.

To develop your game knowledge to a genius level, you must actively break down the game into its many elements, and individually study and practice each chunk.

Now notice how I mentioned grouping elements into meaningful frameworks. The key here is to focus on the most meaningful and immediately important game knowledge.

As an example, a major element in League of Legends is the many items you can build. But if you attempted to memorize a list of every single in-game item, you likely wouldn’t remember many of them at all. But if you were to analyze common builds, and look at your enemy’s item’s while in a real game, you’ll quickly develop more practical knowledge and meaningful patterns.

Similarly, you want to break down and chunk your skill execution. In a game like Counter Strike this may mean focusing on something as specific as developing your gun accuracy during the pistol round. This may turn into setting up bot matches where you only use the pistol, or you may use more creative practice methods like custom maps for aiming, or even some other aim-training games.

And in whatever game you play, attempt to chunk the various game knowledge elements and skill execution, practicing and learning specific chunks until they feel more and more natural.

Now since developing your skills and knowledge effectively is such a complex topic, and arguably the most important steps to becoming a great player, I will go into much more depth in a later video. So make sure you’re subscribed so you don’t miss it. But for now, take away the method of focusing on chunks of the game, with a focused effort on constantly learning and developing these chunks.

If you were to ask a pro-level player, what was going through their mind during an impressive play, they will often say that they were simply reacting off of instinct, or muscle memory. And as a player who has yet to achieve the same level of game knowledge and skill, we might mistake this for some natural level of genius.

But as you now know, the secret mechanism behind such great plays is the brain’s ability to absorb and automate complex information.

And this shows us that when a pro player is making a crazy, 200 IQ play, it’s not a result of them able to make tons of conscious calculations or slow down time, it is essentially their unconscious brain doing all the calculations for them. And this mechanism in which their brain’s learn information, and store it in their subconscious, is the exact same mechanism that your brain uses to do the same thing. In other words, the elusive genius and 200 IQ of pro players, is something that is attainable, and with enough focused effort and practice, it’s something you can achieve!