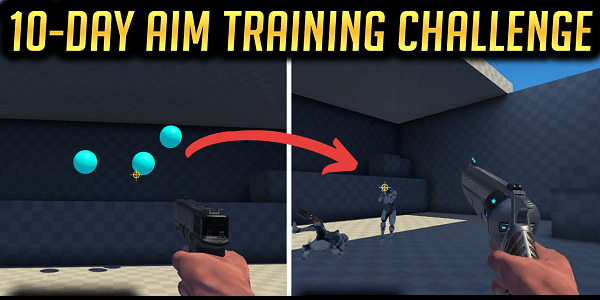 IS AIM LABS A WASTE OF TIME?

How good can you get after training your aim for only 10 days? Can it make someone who’s mediocre at the game into a great FPS player? Well recently I decided to find this out for myself through a bit of a challenge.

Over the past few years, aim trainers have gained a lot of popularity. And whether you just want to play your game of choice without getting completely steam-rolled, or you want to start making crazy highlight reels of your aim-bot level skill, aim trainers have probably caught your attention in the past.

But there’s still universal hesitation around aim trainers, especially the free ones like Aim Labs. So if you want to get good aim, are these trainers like Aim Labs worthwhile? Or are they a complete waste of time? And if Aim Labs can help you, how much improvement could you realistically expect over just 10 days?…

So to set the stage, I kind of suck at aiming. After a childhood of console gaming, the path to mouse and keyboard has been an uphill battle, but it is one that I haven’t given up on. Despite being completely destroyed by seasoned veterans of CSGO, Apex Legends, and just about every other FPS game, I’ve recently decided it’s time to make a change.

In fact, in an upcoming challenge for myself, I’ll be taking on the game Valorant and trying to train full-time in it for 30 days, and of course, I’ll be raising the stakes by doing it all live on-stream.

But to add to the challenge, I decided to go against everyone’s suggestions and to not use Kovaaks. Since most people just getting into aim training will likely pick the free option first, I wanted to see if it’s any good. As in, is it enough to help someone new to aim training actually improve their aim?

My first thought was that it of course, would help. Still, after hearing a lot of criticism from those in the eAthlete community and seeing the opinions of top aim coaches like Aimer7, I started to lose confidence in Aim Labs. Many suggest that Aim Labs is really only useful for benchmarking your score, but not for improving your skills.

So, this sewed a bit of worry into the back of my mind. Was Aim Labs really a good enough aim trainer to help me see results? Well, there was really only one way to find out, and I just had to hope that I didn’t end up wasting my time.

So the first step was to plan everything out. I created a routine and benchmarking system that incorporated equal amounts of the 3 key types of aiming: clicking, tracking, and target switching.

While my end-goal game is Valorant and won’t require all these skills in equal amounts, I really wanted to build my overall aim so I can comfortably switch between games in the future. But if you decide to follow in my footsteps, I suggest prioritizing the types of aim that are most relevant for your game.

Once I had a baseline measured and a 30-minute routine created, it was time to take the leap. Throughout the next 10 days, I would be using my routine 6 times a day, only switching out the last session on days 2, 6, and 10 for measuring my progress.

Now, as confident and excited as I was, on the first day, I already had my difficulties…

– I think the amount of challenge is actually perfect for me; I’m a big believer in pushing yourself as much as comfortably possible. So even though I’m getting awful scores, I think it’s really leading to some progress.

– The weird part is just physical adjustment. About 2 hours into the practice, I started to feel like my wrist was shakey. It’s kind of like how your legs get shaky after working out or hiking for a long time. It just feels like my muscles are too tired to function. I’d be trying to smoothly swipe to the left or right, and I could feel my wrist shaking, which really threw off my aim near the end.

– So hopefully, by tomorrow, it will be feeling better, and I’ll have a stronger wrist because of it.”

Luckily by the next day, I felt much more capable, my wrist quickly built up some endurance, and my skills started to sky rocket. I continued to build quick momentum into day 3, where I was just feeling on top of the world with all the high scores I was hitting.

But on day 4, things got a little rockier. I had upgraded my hard drive, and in that process, Aim Labs lost the data from my first 3 days. I still had my benchmark scores, which mattered the most, but I could no longer tell if I was really beating my previous high scores or even if I was playing above average. And this is something I grew to really like about Aim Labs; even if you’re not hitting high scores, you can still see if you’re improving by checking out your score in reference to your average. Unfortunately, as I lost this feature for the day, I lost a little motivation as well.

On the bright side, I did still feel like I was improving. My wrist felt stronger, my tracking was smoother, and I was naturally getting a little faster. And so I rode that momentum through day 4 and 5 right until day 6 when it lead me face-first into a wall.

– “Today was a little rough. Admittedly I had a pretty bad sleep last night, but I think the bigger issue is that I’m not improving as much as I need to.

– Now, if I’m not constantly setting high scores, then that’s ok. But still, today I was getting scores that were even below average compared to yesterday.

– And seeing that trend downwards is a pretty scary sign, especially seeing as I still have 4 more days left.

– Now hopefully, this was just an issue with me not sleeping well or not being focused enough because I really don’t want to waste my time over the next few days. Hopefully, I can bounce back.”

But, The next day I had an epiphany. The issue was that I wasn’t pushing myself hard enough. In the first few days, I felt entirely out of my depths. The easy scenarios felt like a big challenge. And the more challenging scenarios forced me to focus intensely just to hit a few targets. But as I adapted to this, I noticed I didn’t need to try as hard, and I would even be zoning out a lot while playing. Essentially, I needed to put the pressure back on!

So on Day 7, I took the time to revamp my training routine. The most significant upgrade was customizing some of the exercises, so the targets were smaller, faster, and a hell of a lot harder for me to hit.

Over the final few days, this new routine really challenged me. I had to focus a lot harder, embrace the feeling like I completely sucked at aiming again, and even seek advice from people in the chat.

As I pushed myself harder, I began to feel a healthy level of fatigue in my aiming hand again, similar to the challenge’s first day. And this was a sign that things were going in the right direction.

So what happened after that? Did I dramatically increase my aim in the last few days or become a top-level FPS player after the entire 10-day challenge?

Well, let’s break down both the objective results from what I measured and then see how it translated into the game…

Here is a screenshot of all my results from the experiment. But to simplify it and help visualize it, let’s add up all the scores from each type of aim to see how much each type improved throughout the challenge.

You’ll notice that the inevitable did happen where my progress slowed down a little, especially with target switching. But this is a natural progression, and within 10 days, it actually didn’t slow down that much. In fact, when totaling all the scores, it looks like my overall progress continues to rise up quite drastically, even in the final few days. Of course, this is thanks to switching up the routine near the end but shows how much we can improve our skills in even a short amount of time.

But since Aim Labs doesn’t show how good your skills are in relation to other players, I decided to use Kovaaks purely for this purpose, measuring myself before and after the training. I treated this as more of a quick benchmark and didn’t try to be super thorough with it, but I did measure myself on 5 different tasks that covered clicking, tracking, and target switching. Within these drills the most drastic improvement was in my target switching skill, but lets see what my overall aim improvement was.

As someone whos relatively competitive, seeing this improvement in skill in relation to others might be the most rewarding result, at least when talking about the objective measurements. But what about the subjective improvement? How much did these results improve my in-game performance?

Now, during the challenge, I abstained from playing any game. But on Day 10, I hopped into some Valorant games to see how much of the aim training actually translated.

It’s worth mentioning again that before the challenge, I was pretty bad at aiming. And as you might expect, 10 days didn’t exactly turn me into a top-tier player. But I did start to hit some shots that genuinely surprised me…

Ultimately I noticed 1 powerful thing. Previously I struggled to hit headshots, and when I did hit them, I’d have to take my time to line them up. But suddenly, I was hitting shots where it felt like someone else was hijacking my body. Shots that honestly surprised me. While I can’t yet hit these shots every single time, it is incredible to see what I’m now capable of after just a short aim training experiment. And I’m excited about what I’ll be able to do as I begin to make this a more consistent routine.

So what can we learn from this experiment?

Well, I hope you gained 2 new perspectives from it, the first being that aim-training is worth your time, but only if you’re constantly pushing yourself in ways that make you feel sufficiently challenged.

The second is that even while some aim trainers may have benefits over others, Aim Labs might not be as bad as you think, assuming that you utilize the custom drills.

So if you want to start surprising yourself with satisfying headshots or just want to build your confidence in your aim, then start by creating your own day 10 challenge. During that time, pay close attention to the ups and downs of the experience and learn as much as possible. On the other end of it, you’ll no doubt be a better player…